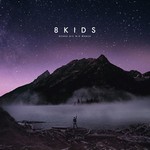 Those music genres, which ends with –core don′t belong to my favourite one. Despite it, I chose to make review on album Denen die wir waren from young German post-hardcore band 8kids. And sometimes, some of your common decision could grow into the one of the best thing you have ever done during your life. For me, this decision was take for a review Denen die wir waren.

Intro full of atmosphere leads to the first ,,regular“ song Bordsteinrand. Melodic combination of several genres such as rock, metal, hardcore…, which wisely alternate melodic vocals with scream flowing in the middle tempo. On the other hand, Über den Berg (one of my most favourite songs) is faster, and I could imagine, what it can make during concerts. And again, Ich kann die Welt spüren step on the brake, and we can hear beautifull atmospheric song. So, this is it. This is it Denen die wir waren, where fast and furious songs (Zerbrechen) with melancholic, where the best for me were Geist (best song on the album, without a doubt) and Winter in dir, where we can also hear female vocal.

And right these softer and atmospheric songs are the best side of Denen die wir waren. Because, play hard and aggressive is in the todays word of hardcore bands is their duty, sometimes maybe stereotype. 8kids show to all that they know how to play and fight on this part of front. But on the other hand, play gently and still hard music is totally another case. And again, 8kids go like watches from Switzerland, and even, in some songs they do it better like bands playing atmospheric music- doom, gothic, black…. Here I must mention Geist. Beside the different tempo of songs, all of them are melodic enough, but still stay in hard genres. It is same with the vocals, where singers Jonas and Hans alternate melodic chants with the scream.

8kids belongs among bands which sing in native language, concrete in German. This is something which I like every time, but the only one negative for me was my knowledge of German.

So, some sum up. 8kids prepare for us melodic hardcore, where we can hear influence of another genres, and without some experiments. Today it is.