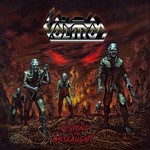 Volition is the young band from Tulsa – Oklahoma (USA). They began career in 2013,  their first official release was in 2016- EP “Vengeful Satisfaction“.  Since the beginning there was a lot of line-up changes. The constant line-up is: Malice Von Creitz (drums)  a  Christian Potter (guitar, vocals).  After numerous line-up changes the band in March 2017 has recorded their debut  “Visions of the Onslaught“.

After 90´s thrash metal had survived a terrible times, where only few of bands were able to bring this kind old feel of this genre.  While the listening this CD, I had some kind of nostalgic feeling of the evil album “Hell Awaits“ by Slayer. Sometimes you can hear a little bit from punk, death metal, but still it had an aggression and direction to the listener.

“Visions of the Onslaught“ opens an instrumental piece “Morbid Devastation“ which in my humble opinion one of the best songs on the CD.  “Theories of Punishment“,   “Enforce with Violence“, .  “Vengeful Satisfaction“, “Volition“      with those songs you can find  plate of fantastic riffsand.. „Justified Mortality“ is like from another planet (from riffing, tempo, lyrics to singing) “Crypts of Flesh“ the way of payling riffs and  atmosphere, typical Slayer.

From singer point of view, you can definitely hear influences from Tom of Sodom, to be honest with you, last couple of years, I really hear that a lot of singer from this style had the same way of singing. I´m asking why?

Overall:  This i show should sound and thrash ablum. From mixing to a mastering, from my point of view, in the future they have to look on their drum sound, not to be that plastic. The band is right now at the time of their breakthrough. They have to settled a stable line-up.  Beacuse this had a potencional. When they find stable line-up, and release next album that will be even better than this one, the success will came.

One thought on “Volition – Visions of the Onslaught (ER)”