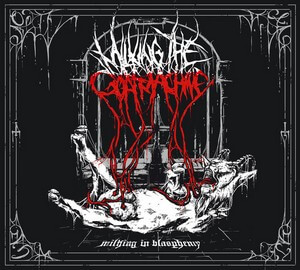 Legendary US Power Thrashers HEXX have inked a new two album record deal with Germany’s High Roller Records. The band is currently working on twelve new songs with producer Bart Gabriel (CRYSTAL VIPER, BURNING STARR, MYTHRA), who also produced band’s latest single „Tyrants Of Steel“ (split with RUTHLESS). The new album will showcase the band’s return to their roots, and the style they are known for from their early classic albums „Under The Spell“ and „No Escape“. The album will be entitled „Wrath Of The Reaper“, and has been scheduled for the release in the Spring/Summer of 2017.

HEXX, led by founding member and guitarist Dan Watson, features amazing new vocalist Eddy Vega and Bob Wright (from BROCAS HELM) on second guitar. The lineup is completed by Mike Horn (who joined HEXX in 2013) on bass guitar, and John Shaffer (who played in HEXX between 1986 and 1995, and returned in 2014) on drums.

In addition to releasing the „Tyrants Of Steel“ single, in 2016 HEXX also reissued their early albums „Under The Spell“ and „No Escape“ in the form of a 30th Anniversary 2CD/DVD box set via Metal Blade Records, and the 1991 technical epic „Morbid Reality“ via Dark Symphonies Records.

Legendary Early SORTILEGE Albums To Be Reissued By No Remorse Records

„SORTILEGE – the best French Metal had to offer. Timeless classics!“ – this quote from a Deaf Forever magazine journalist, Michael Kohsiek, pretty much sums up the status of Sortilege. The French Metal cult act formed in 1981, released their debut same titled EP in 1983, and the amazing debut album entitled „Metamorphose“ one year later. Both releases quickly gained cult status, and are known nowadays as some of the the most important – if not the most important – Heavy Metal releases from France.

In the first months of 2017, No Remorse Records will reissue both masterpieces. The same titled EP, which will hit the streets on January 30, 2017, will be extended to a size of a regular album, as it will include four bonus tracks, taken from the band’s demo tape from 1982. The reissue will be available as a CD and limited edition LP. Two weeks later, on February 13, the „Metamorphose“ album will be released as a double CD, with the original version of the album and the previously unreleased first mix version on Disc 1, and the rare English version of the album (originally released as „Metamorphosis“) on Disc 2. The double LP version will include the original version of the album, as well as the previously unreleased first mix. Both the „Sortilege“ EP and the „Metamorphose“ album will be also available as a strictly limited box set editions, incl.: the CD, exclusive vinyl LP (different color than the regular edition, available in the boxset only), t-shirt, poster and a patch. Both reissues have been remastered by Bart Gabriel (CIRITH UNGOL, SATAN’S HOST, CRYSTAL VIPER) and got special “old school and dynamic” treatment.

Listen to „D’Ailleurs“ from the „Metamorphose“ album:
https://soundcloud.com/noremorserecords/sortilege-dailleurs-official