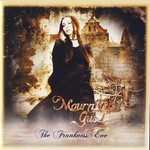 All my contacts with the art from Eastern Europe got really well- movies, literature… The only thing which go around me was music. But until that moment, when I found in one video server (guess which) music group Mournful Gust from the Ukraine. Album The Frankness Eve was released in 2008, and this act end 8 years long waiting of fans of Mournful Gust on a new album. The Question is, if this waiting was ,,totally worth it“.

Number eight is in this case some symbol, because The Frankness Eve contains 8 songs. Everything starts with A Pain to Remember, which show a lot of about music. Dark and melancholic doom/gothic such as My Dying Bride and old Paradise Lost.

Hard music mixed with melodic passages, keyboards and folklore music. And all of these elements are ruled by Vlad´s growl. This combination got really enormous field to realize – song last over 9 minutes, and with From Illusions and Jealousy and With Every Suffering belong to the most complex song on the whole CD.

They are also the hardest one, but again, they contain yet mentioned elements. It´s Our Own Tragedy, shorter, more soft song, where traditional music take significant part.

And this all result to the great melancholic song with hit standards, as much Cold Solitude, what was the first song which I have hear from Mournful Gust. Honey for my Wounds is for a change practically ,,acoustic“ – contains only keyboards and folklore elements.  Songs Recover me in Sores and To your Deceits… Again. One word. Masterpiece

The Frankness Eve is album full of contrasts, different elements and influences. Beside the hard, complex songs we can hear also the shorter one, but they are still hard, except Honey for my Wounds. Another contras is made by metal passage versus the softer one, which are created thanks to keyboards and folklore.

And honestly, put this elements into the music was genial idea. Also, I must mention melodic passages such as guitar solos, which are simply great.  Another contrast is Vlad´s vocal. His growl from the deepest parts of his soul is alternate by the melodic.

His vocal is also on the really high level. Every song is full of authentic atmosphere- melancholy, gloom… This atmosphere is believable so much, that in some parts the pain about which Vlad sing, is our own pain. And it´s how it should be in this musician genre. So if we put together great instrumental side that combine a lot of influences, strong atmosphere and amazing vocal, result is….

The Frankness Eve is probably underrated  and unknown album. But genial, and you should hear it. 6/6