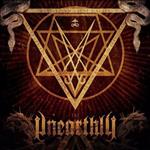 And then believe that we are alone in whole space, when music groups are ,,unearthly“. It is also name of band from Brazil. Yes, that country which gave us football, samba, Sepultura. And of course Unearthly. They are not begginers, cause they were born in 1998 and The Unearthly is the 5. album.

We will start with sin, but not with the hereditary sin. The Sin Offering, first song on CD. Genre black/death sits, but we will not walk through scandinavian path, rather something on style Rotting Christ. Fast introduction, which show strong part of group – impact of regional music.

It is really good when blast turns with tribe drumming. The Confidence Of Faith swim on similar wave, and also relieved by guitar solo. We can hear regional music in intro of Eshu too, (God on jorubian religion).

But there is no reason to afraid, black will come back to us 🙂 Title song, and Agens Mortis, are ones of the more faster. Chant From The Unearthly Rites, instrumental and acoustic song. Only one word. Masterpiece. One of thing which make album multigenre. I have to mention short calm passage in The Dove And The Crow, which is not so special, but i really like it, and guitar solo after it is probably best on whole CD.

We can hear 11 songs on the album, one of it is instrumental. CD have good structure- fast songs tribe with the ,,calm“ pieces, but there is not some really slow doomy thing. Blask/death sit, but we can hear also impact of another genres- main regional music.

It sounds in background, so create perfect coulisses for hard riffs, or blasts. Chant is not traditional screaming or growl, it is something like Celtic Frost or Angry Sakis from Rotting Christ. And right this band from Greece is most similar to Unearthly. And because of i like Rotting Christ, i like also Unearthly.

There are not so much mistakes in The Unearthly, put black and traditional music together and mix it with another genres (main death) was great idea with perfect result.