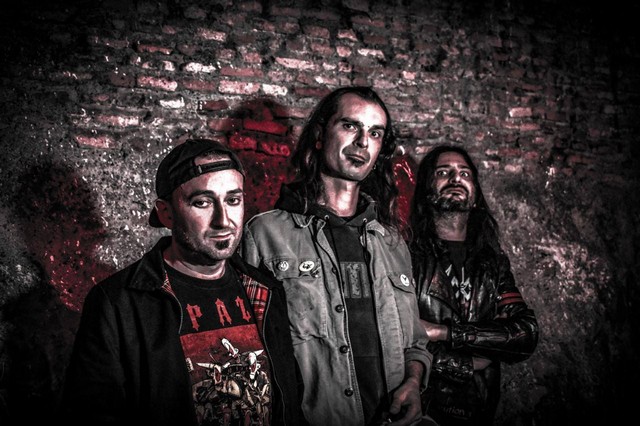 Verano´s Dogs are interesting appearance of italy scene. Not for genere (death/grindcore) but for lyrics of debut album Summoning the Hounds and band´s name. This album was released in June via Slovak label Metal Age. You can read interview with bassplayer and vocalist Ulderico and guitarist Pompeo.

Hi Ulderico and Pompeo. Verano´s Dogs released debut album Summoning the Hounds. What was the process of creation of it?

It’s been quite a long process, since from the beginning of the band we had a few changes in the line up. Some of the songs were written by an old member and we made changes on them with the actual line up before recording them. The songs that are more focused on the way we are going to follow are the last we play live, “Mind necrocopolis”, “The rising of the necrotic hound” and “The Hound”. Anyway, our creation process is quite normal, one of us comes to practices with a bunch of riffs and we argue and fight until the last survive. 🙂

How will you describe it to the fans who have never listen to your music?

I was also interested about theme and lyrical concept of the album and also name of the band. Could you tell something more about it?

Our moniker is related with Verano’s cemetery, not the biggest but surely the most iconic here in Rome.  We decided to link this place it with the dog because it’s an animal related with death in many different cultures and mythology like the greek and egyptian ones. When we started to write our lyrics it was obvious for us to think about the dog in literature, so in the end all the songs are focused on a main topic even if this is not really a concept album.

Why do you choose right this concept?

Maybe in a past life we were dogs too and this is a tribute we had to made. 🙂  Seriously we didn’t plan it and probably next lyrics will be more focused on real life and current issues.

Due to your theme, are you fan of mythology and horrors? Have you study some books, materials etc. before writing process of lyrics?

We’re definitively fans of horrors and one of our main obsession is Bruce Campbell, Evil Dead and Army of darkness. After we decided that our songs would have been about the myth of dog we read a lot and we came back to books that we already read when we were younger, like “The Hound of the Baskervilles“ by Conan Doyle and Lovecraft‘s first Cthulhu chapters. We are into any kind of art related with darkness and related human feelings.

Recently we had some problems with our drummers. So we had to slow down our live activity. Our last drummer moved to Bratislava, so we had to find a new one, now we have a new one but he needs time because he’s a sound engineer and he travels a lot around. The nearest place, where we will play is Bari, southern Italy. It’s going to be a festival in a squat with different kind of band, from hardcore to metal all bonded by the idea of antifascism and this is exactly the kind of situation we love to be involved.

Is it possible, that you will also visit Slovakia to play some show?

Since our past drummer lives in Bratislava now it’s possible we play with him a show there or more, let’s keep the fingers crossed! Personally I played a few years ago in a festival called FFUD in Sered and it was great, one of the best memories of that tour.

How began you cooperation with Slovak label Metal Age Productions?

We just asked a few labels we like some help and their proposal was definitively the best. We coudn’t be happier with them, they have been professional friendly over any expectation and you can really feel they work with a great passion.

Could you tell us something about metal scene in Italy?

A week wouldn’t be enough to describe it. Like everywhere it’s something complex and not easy to sum in a few words. In the latest years we had bands that became big with a lot of hard work like Fleshgod Apocalypse and it’s strange for us because Italy has often been considered a sort of third world for metal. About us we feel as part of a scene that is not into big booking agencies, pay to play tour and which is not afraid to refuse any kind of sympathy for fascist or nazi scum. Most of our shows are in squats and fortunately there are many grind and metal bands in Italy that agree with this point of view.

Maybe little personal questions, but do you have a dog in your life?

Actually some of us have cats and not dogs. 🙂 We love them but we really feel that they need a lot of space for a healthy life, so until we get rich and buy a big house with a garden we’re not likely to have one.

Ok, that was the last question. Thank you for the interview, and feel free to share anything with the fans. 🙂

Thanks for this interview. Keep an eye on our pages for news and on Metal Age Productions for more great bands!