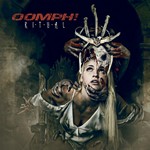 Metal music is great in that way, that it offers many genres and subgenres which can bands plays. And if they don´t choose any of them, talented one could create own genre, alike the OOMPH!. Band, which became through years of existence true legend, and in the beginning of this year release new album Ritual.

Pilot songs are clear evidence of Dero´s words, that this is one of darkest and heaviest album of band´s history. Tausend Mann und ein Befehl and Kein Liebeslied present everything, what we love on OOMPH!. Hard music combined with many other genres, doom mood, anger, melancholy, political incorrect and provocation. What more we need? Mainly, if all of these attribute belong also in the rest of album. So in Result we can hear musically rich and enlighten CD. For example, hard, mystic and dark Europe together with Chris Harms from Lords of the Lost, „dance-electro-metal“ Im Names des Vaters and provocative TRRR-FCKN-HTLR, or melancholic (but still hard, because it is not „Liebeslied“) Das Schweigen der Lämmer, Phoenix aus der Asche or Seine Seele. Just rich offer for everyone. We can only imagine, how impact on the new album have two concerts played in Russia together with orchestra, but in case of Ritual everyone done his job perfectly. We can hear wise combination of metal, electro, and other genres, high level of an instrumental side, and Dero is still in a great form and show his quality. But I have to also admire emotional part of album. By words of Dero, success of artist is sound hard, when he is anger, and melancholic, when his feelings are this way. So, Ritual is success, because it is also full of wide pallet of human emotions. Sometimes you may feel scary, in other moment angry, then sad. But bet that you will never be bored. Next chapter are lyrics, but OOMPH! without provocations? Never 🙂

Band get really more heavy and dark according to latest album, but still hold unique sign. Quality from Germany in best light.