Home » Interviews in English » Beatriz Mariano (Okkultist) – ,,Have your own line of ideas.”

Maybe you know, maybe not Fernando Ribiero, singer of Moonspell from Portugal, made his own label Alma Mater Records on 2016. Via this it was released the older albums of Moonspell, he will re-release cult album from Sweeden doom/death metalists Tiamat – Clouds. But Fernando don´t forget also on younger bands. On 15. march It will release full debut album Reinventing Evil by Portuguese death metalists Okkultist. They started band on 2016 and their singer is beautifull dark woman Beatriz Mariano. She also answered few question.

Hi Beatriz 🙂 Band Okkultist will release debut album Reinventing Evil. What was process of creation of it?

Beatriz Mariano: Hi 🙂 We’ve always been constructing ideas, and I mean non-stop ever since we started. There’s no reason to stop being creative. We saw this as a chance to gather our best ideas and make some magik!

We’ve always been on the same page, so we just sat together and discussed the kind of vibe we wanted and started putting riffs and rhythms together. Even though it was a very exhaustive process, it was immensely rewarding to see our ideas come to life.

How will you describe it in a few words?

Beatriz Mariano: The album? Pure fucking evil! We want to raise Hell with it. It’ll bring the dead back to life! 😉

What are the main differences acording to your debut EP Eye of the Beholder?

Beatriz Mariano: I’d say this is almost like “Okkultist 2.0” (in a funny way because, welp, we’re the same). There’s more thought and work put into the construction. While in Eye Of The Beholder we wanted to keep it raw, in Reinventing Evil we are adding toughness and ruthlessness.

You are multitalented person, because you are not only singer, but also author of cover of album. What is the main idea behind it?

Beatriz Mariano: The idea came to me as we were recording in the studio. Our previous cover has an eye, and I thought we could keep using human anatomy. Something that could be simple and yet impactful.

Album will be released by Alma Mater Records of Fernado Ribeiro. How did this cooperation begin?

Beatriz Mariano: It started when Fernando and I were discussing some visual ideas and then I presented him to this project I was involved in, and he immediately sounded interested in us, even though we only had a few demos out.

Beatriz Mariano: For now we have our album release concert on March 15th at RCA (Lisbon). 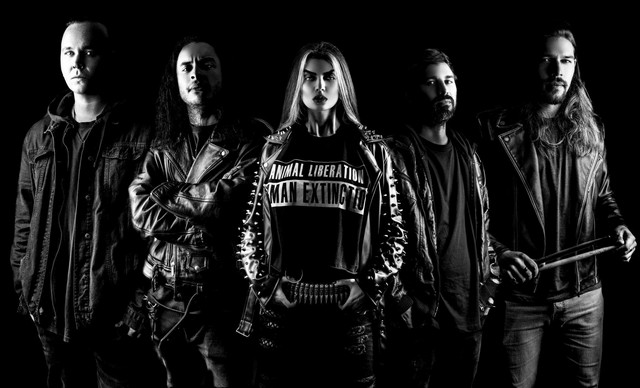 Could you tell us something about metal scene in Portugal?

Beatriz Mariano: Portugal is really small, so you can imagine the size of our community, but we’re tight. I see a lot of support from bands to bands, from fans to bands, from everyone.

What is the main source of inspiration for you? Are you fan of horror etc.?

Of course the human brain is inevitably attached to what brings us interest in all senses, but every time I meet something that’s been done my urge is to step away from that as far as I can. Why go for something that’s already been made? Just be creative! Have your own line of ideas.

Could you tell us something more about your lives beside the band?

Beatriz Mariano: We like to keep that private if you don’t mind 🙂