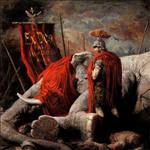 It absolutely does not matter whether we are descendants of Romulus and Remus, barbarian tribes living in the north, or if we come from the countries that are the cradle of civilization. The Roman Empire was one of the most important and highly developed state system in human history. That her legacy lives till present days, is known well for example by the lawyers, as well as by military commanders and by many others.

Also musicians. So this taken, the world saw the birth of the album Immortal Wars recorded by the band Ex Deo, which members are mainly from the group of musicians formerly known as Kataklysm.

One of the first things that may grasp interest of listener is the incorporation of symphonic death metal elements, which is itself quite melodic genre in case of Ex Deo, so in combination with classical music the outcome is somehow a new genre.

Symphonic music occurs here in two stages- as undertone metal music, or vice versa, sometimes it completely takes over the reins, and it is what she plays prim. I have already encountered with quite a number of bands that incorporate classical music to their work, but in Immortal Wars, this element has completely new dimension. These are not any smooth tones, but in many cases, these passages could form a separate song even without death metal.

Another thing a listener might be interested in, is creating a dramatic atmosphere. Each song becomes a story that took place 2,000 years ago, yet today. Significant contribution to this are different incorporations, for example in the promise to the father in The Rise of Hannibal, brilliant intro to the Cato major – Cato Major- Carthago Delenda Est!... The awesomeness in every moment, which I personally consider to be the biggest perk of the album.

Altogether we have the opportunity to hear 7 tracks + 1 intermezzo, specifically Suavetaurilia, in which are taking turns passages in the mid-tempo with the faster ones. If you are looking for some much slower, or some ballad type melodies, your search would have ended in failure, although intro to the last song The Roman reminds something similar.

As I mentioned above, the combination of death metal and symphonic elements are incredibly successful, so the fans of the heavier genres will be thrilled and so will be those who hanker for the metal with something different and innovative. That the authors used in the large portion of songs classical music, does not in the least detract from the heaviness and energy.

But again, if you’re a fan brutal death, or technical death metal, you will find it in this album as well. I’m not saying that instrumental parts have something to reproach, and that it is not on a high level, therefore there are not guitar solos coming at you from every side. In this case, this is not something to be sad about. As I said, there is hardly to say against the instrumental parts.

Taking look at the members of the band Ex Deo, it would be suitable to compare the production to the band Kataklysm, whose music I find it a little heavier and less melodic. That take, if you’re a fan of the Kataklysm , you know what to expect from this band, that basically has its members. Considering the vocals, only thing I have to say is that Maurizio does his job perfectly and he shapes such an authentic atmosphere that is apparent through all the songs.

Immortal Wars was released in 2017, but it not only shows us the world as it was 2,000 years ago, it even takes us there through the music. All I can say are these three words: