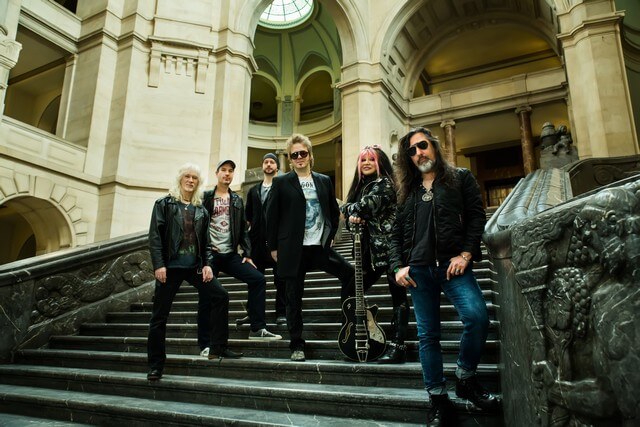 Name Ossy Pfeiffer probably will not tell a lot of to fans He is the musician from germany who has played in bands Nowadays he creatwd the bandi ignore where he put together artists like Anca Graterol (Rosy Vista), Steve Mann (MSG, ex The Sweet), Lars Lehmann (UFO, Uli Jon Roth). They will release new album A Line To Cross on 23. February and you can read about it and more in interview:

Ossy Pfeiffer: Very good, thx for your interest and support!

Band Ignore the Sign release debut album A Line to Cross. What are you feelings about it?

Ossy Pfeiffer: We are all very excited

Ignore the Sign can be consider in many ways for a super band. What was the main impulse to create it?

Ossy Pfeiffer: Ignore The Sign is definitely a band, not a project 😉

There are situations in life when you should drop your original plan and follow your instinct instead. which is precisely what I did: instead of releasing new material on a solo album –  we involved friends and renowned colleagues in the production, allowing a real band to emerge from this fruitful collaboration. We don’t care about „what do people want to hear now“ – Therefore the name IGNORE THE SIGN is self explanatory. Members are myself as vocalist and keyboarder, guitarist/vocalist Anca Graterol (Rosy Vista, Catena) – you probably remember her from touring in Slovakia with Rosy Vista – former The Sweet and current MSG & Lionheart guitarist Steve Mann, bass player Lars Lehmann, renowned as a studio musician with British rock legend UFO and member of ex-Scorpions guitarist Uli Jon Roth’s band, as well as percussionist Momme Boe and drummer Kristof Hinz, who has just finished the drum takes for the new Eloy album.

Was it big problem to recruit other musicians, or they were immediately into it?

Ossy Pfeiffer: To be honest: Being a team-player I never felt good about the Solo “OSSSY” thing at all. But not knowing where the journey would lead to, it was the only way to keep the reins in my hand. Luckily the people involved from the beginning are my best friends. Yes, I know – probably every band says that – but in our case it’s a 30 year lasting friendship with trust! Therefore it was not a problem at all and it never was a matter of recruiting anyone – Everyone was into it straight away!

Let′s talk about A Line to Cross again. What was the process of creation of it?

Ossy Pfeiffer: Whoever has an idea for a song puts it into our online drive as demo. We choose everything together involving our mate Olly Hahn from our label SPV / Steamhammer. Anca and myself produce raw demos in her FRIDA PARK STUDIO. After that every member either plays his part in their own studio or we meet for a recording session in FRIDA PARK. Olly Hahn is the final decider in the “chain” 😉 What I really like is that we have 3 lead voices in the band! Myself singing most of the songs – Anca is absolutely necessary not only for “colouring” second voices and backings – she is a killer singer! Check out “The Story Isn’t Over”, “Can’t Find The Door” and the choruses of “Silver Wind”. Lars nails his written song “God With A Million Faces” Glenn Hughes style 😉

For me, A Line to Cross is multi-genres album with many influences on a high level. Is this fact result of various background of members Ignore the Sign?

Ossy Pfeiffer: Exactly! The album titled song “A Line To Cross” probably is the “figurehead” of what we do – fully packed with all we love!

Ossy Pfeiffer: Surely not! It’s the beginning of a great yourney!

Ossy Pfeiffer: Having our great record label SPV / Steamhammer now it will be much easier to play and tour! We got some gigs in Germany summer 2018 and are looking forward to concerts and touring worldwide 2019.

Is it possible that you will visit Slovakia?

Ossy Pfeiffer: Abslolutely! Anca already told us that it was absolutely amazing playing for you with Rosy Vista! Great country, lovely warm hearted people! Can’t wait to have couple of slivovica 😉

You are also known thanks to your solo work. Could you tell us some news about it?

Ossy Pfeiffer: Well, the result of “my” solo work is that band. As mentioned before I never felt good with doing stuff alone. The only real solo thing was the firs “OSSSY – Serum” album. OSSSY Serum 2.0 was already with all band members. That’s why we changed the band name – taking the name of an own song 😉

Ok, that was the last question. Thank you for the interview, and feel free to share anything with the fansJ.

Ossy Pfeiffer: Yeah, will surely do! Thx again for your interest and support! Rock on!