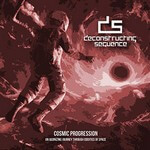 Advertent reader of my reviews could find out that physics (mainly astrophysics) has special place in my heart. Alike the metal music. So, if we put these two thing together, I should have second Christmas. And right this is the case of debut lp album Cosmic Progression: An Agonizing Journey Through Oddities of Space from band Deconstructing Sequence. Get ready, space odyssey will start in 3….2…1….

In practise that means many hard and heavy parts- during which you could enjoy uncompromising guitar riffs, fast drums, and all is supported by synthetizators. And right this instrument has biggest impact on final sound of the whole record. Also thanks to it, group create fantastic space atmosphere.

Best example of my words is song with number 2 called V4641 Sgr, which can be divide into two parts. First is yet mentioned combination of progressive and black metal on a high instrumental level. But personally, I was the most impressed by second part respectively end of this chant.

These few second filled with breath taking, fantastic atmosphere, and feelings, that I have lost somewhere near the black hole were simply genial. Small dramatic apostile is after this just small bonus. However, there are more dramatic parts which enrich still very rich instrumental side of record.

Because all 9 songs flow according to mentioned formula- mixture of hard, raw and intelligent black metal and many synths passages. Great formula, great band, so result have to be also great. Cosmic Progression is one of that albums, where I can not find any negative.

I enjoy it from it beginning, has many innovations, high instrumental level, genial atmosphere. This is way how to create progressive black metal album.