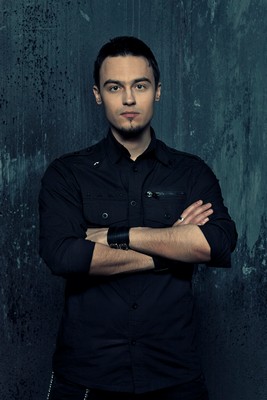 In these days, Ukraine is mentioned in medias mainly with political situation. But we can not forget on one important thing- metal scene in this country, which is not only depend on groove metal band Jinjer. Evidence of this notion is one man- Max doom/ death band Sorowfull land Group, which has released new album these days I Remember with big amount of interesting guest- Daniel Arvdisson, Vlad Shahin or Vito…. More information can be found in interview with Max

Max Molodtsov: Hails from Ukraine! Not cool ’cause I’ve got flu right now to deal with. I’d say – I’m quite doomy at the moment 🙂

Band Sorrowful Land has released second album called I Remember. What was the process of creation of it?

Max Molodtsov: Well, the process was pretty standard for me –  I compose music when I feel inspiration to do so. All of these new songs that appeared on the second album were written at the same period when I wrote tunes for the EP “Where The Sullen Waters Flow”. It just made sense to me that after release of the first album something more minimalistic should be done. So, yeah, I had a bulk of songs back in the days.

Were there some significant differences between it and your debut album?

Max Molodtsov: The first and the most significant difference is plenty of clean singing on the album. Let’s say I was tired a bit of hearing and doing only growls, screams etc. Clean vocals added so much to the melodic aspect of the songs. And “I Remember” sounds much heavier than the previous album, I down-tuned my guitar even more this time, haha!

Max Molodtsov: I think I need to give credits to all special guests who participated in this piece of music. So let me name them all now in the order of appearance: Kaivan Saraei (A Dream of Poe), Daniel Neagoe (Clouds, Eye of Solitude, Shape of Despair), Evander Sinque (Who Dies In Siberian Slush), Vladislav Shahin (Mourngul Gust, Autumnia), Vito Marchese (Novembers Doom, The Kahless Clone), Daniel Arvidsson (Draconian, Mammoth Storm). And now let’s return to how it all started. As I mentioned before – one day when all the music were recorded I’ve caught myself thinking: “It’s vocals time! But growling all the way through the album? Meh… Not on my watch!”. I shared my thoughts with my wifey and she said “Why not? Give it a try”. Furthermore somehow I felt very lazy about singing all the songs by myself. I’d say I felt even that I won’t be able to do justice for the songs at the time. I need to say that for me music comes first. If the song doesn’t have that musical hook – then even the coolest rhymes and lyrics won’t save it. I always try to concentrate on creating of catchy melodies and riffs (That’s why the very first guest that made appearance was Vito from Novembers Doom. I admire the dude’s guitar work for so long that I knew who I gonna call first. 🙂 Thereby I’ve come to this point when I decided that I’ll sing only on one composition but it would be the most sincere and personal song I’ve ever written. I put all of myself in that one particular song. Thus, I had yet more five different songs that needed layered vocals. And then I’ve started creating a list of my favourite singers in this genre. I listened to the bands and tried to imagine if the voice of one or another singer will fit the song and how. I spent some time doing this and then the list was done. And I must confess that original “guest list” looked almost completely different. Changes were made by various reasons. I think we shall omit the details. The result says it all. The main thing – none of these changes were in vain. Quite the opposite – I’m happy with the result we have! I gave them total freedom in creative process and each of the singers brought a piece of his soul to the song, which is the main point for me. I wanted them to do whatever they’re good with – clean vocals, growls, screaming, even black-metalish shrieking. As for cooperation nuances: I had plans for Vito’s guitar solos for couple of years ago, he said “I’ll do it” back then. All I did – just sent him the song to jam to. Also I’ve known Daniel from Draconian for like…7 years now. I asked and he agreed in no time. Vlad Shahin – one of the vets on Ukrainian doom-metal scene. I know him for a while too. I always like the way he perform, his clean singing is outstanding, so I dropped him a line too. As for the other guys – I’ve sent ‘em a so-called “letter” via Facebook where I introduced myself and asked if they want to add their attitude to the songs I have. And the rest is history already.

Have you also participated on their musician´s project, or it is possible sometimes in the future?

Max Molodtsov: Not yet, but I’m up to it! I’m open to the new projects as well. If someone thinks I’m the right dude to get the job done – just hit me up on Facebook or wherever

For me, I Remember is a great album which perform the wide pallet of human emotions in combination with perfect music. The whole songwritting lyrics up on you?

Max Molodtsov: I must say a huge thank you for your kind words! Means a lot to me! As for the lyrics since I started Edenian (my main gothic-doom band) I used to have some quantity of songs that are lyrically based on old classic English (primarily) and American poetry. I keep this tradition alive to this day. In another words I like thinking that I give these poems a new life. Or rebirth. As you wish. I do think that words of wisdom are in there – in classic poetry so I use it a lot. Sometimes I make adaptations; sometimes I take the whole poem and try it with the music. This time I wrote lyrics for three songs, other three were based on poems.

Sorrowful Land work now like a one-man-project. Is it possible, that you will change it sometimes in the future?

Max Molodtsov: I highly doubt that. And the reasons are few. First one – lack of doomy-oriented musicians in my city. Second – I feel comfortable when I’m in charge of all things. That’s the way I roll. I used to it. When SL started four years ago – things were different back then. There were two of us. But since early 2016 SL is totally my brainchild.

Could you tell something about metal scene in your country?

Max Molodtsov: Let’s put it that way: Ukraine is known for its strong black-metal scene which is quite impressive. These names are huge. Also we have bunch of old good death-metal bands. That’s pretty it. I’m not interested in modern bands ‘cause it’s not my cap of tea anyway. Doom-metal scene is dead and gone here. Sad but true

Could you tell us something more about your life beside the band?

Max Molodtsov: I’m quite simple and ordinary man, you know? Besides music I fond of reading fantasy and historical books, playing computer games a little bit. Also I’m a comic-book and movie geek. BTW, recently I’ve started working as a sound-engineer at my own studio, called Eternal Studio. I do mixing, mastering and all the stuff. If someone wants me to mix/master their music – you’re welcome at https://www.facebook.com/eternalstudiokh/

So, that was the last question. Thank you so much for your answers, and now you can share some message with our fans. 🙂

Max Molodtsov: Thanx again for having me here! It was fun answering these cool questions! Fans, please support your favourite artists by buying their stuff – CDs, digital copies, whatever. You can’t even imagine how it’s important nowadays! Not only for the artists but for the labels too! And of course STAY DOOMY!! \m|