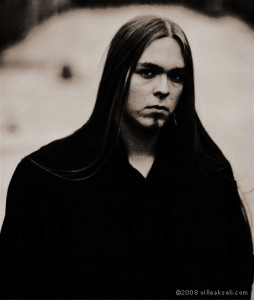 Few weeks ago Stratovarius released their album Nemesis, which is praised in many reviews. Ladies and Gentlemen, guitarist Mr. Matias Kupiainen 🙂

Hello Matias  this year it will be five years since you replaced legendary Timo Tolkki in Stratovarius. How do you feel?

Matias: I feel more confident than ever. I think our new drummer and the new record has given us more self-confidence. Everybody is really excited and can’t wait to get on the road again.

What can you tell me about the fresh album Nemesis?

Matias: It’s a very powerful album and I think it’s the best album what I have done with Stratovarius. This time we took more time to finish the album and it wasn’t that rushed what our previous two albums were. More time equals more quality and more thoughtful entity,

From the first hearing  I got a  feeling  that bands direction is totally different like  it used be on your previous albums (Episode, Visions). Is it true?

Matias: It’s not totally different approach. Of course there’s some new elements but the core of Stratovarius is there. We tried to do a very melodic and heavy album and I think we succeeded pretty well. If you think Strato’s older records, the melody is one of the biggest essence in our music.

It sounds more progressive especially the guitar riffs, was it a purpose?

Who wrote  the most of the material on  the new album?

Matias:I think it was me. I wrote 6 songs of Nemesis; Abandon, Unbreakable, Stand My Ground, Halcyon Days, One Must Fall and Nemesis. Timo wrote most of the lyrics to my songs except Unbreakable and One Must Fall.

There was any cooperation with new drummer Rolf Plive on this album?

Matias: We spent around two weeks in the studio with Rolf. He gave us lot of fresh ideas how to approach our new material and I think that is the one of the main reasons why this album is as good as it is.

What about  the lyrics of Nemesis, what is the story behind it?  (My favorite song)?

Matias: The lyrics tells a story about a preacher who has the power to share justice. I think it’s a one the most powerful songs in the whole album because of the lyrics. If you sing “POWER” in a powermetal song, it can’t be wrong right? 😉

Are you guys preparing a tour? Could you speak something more about it?

Matias: We’ve been rehearsing since january and figuring out what new songs we should play. It’s almost impossible to skip a song from Nemesis so we ended up preparing almost all the new songs. It’s gonna be hard to do the set list for the tour because of this but I think we can find a nice compromise between old and new songs.

Will Amaranthe be your only support band? Or there will be more suport bands?

Matias: We’re doing a “split-headline-tour” with Amaranthe. Both bands plays around 75 minutes and then we have a band from Florida USA called ”Seven Kingdoms” opening for us. It’s gonna be a massive power metal party every night! 🙂

What members of Stratovarius  usually do, when they want  to rest from music?

Matias: We don’t rest from music, we’re musicians  🙂 Basically we work all the time. If it’s not Stratovarius, then we do some other music projects or compose new material. There’s really rare moments when we don’t “do” music 🙂

When did you start perceive Stratovarius and what was  the first song by the band you have  listen?

Matias: I think it was around 1996-1997 when they released Episode and Visions. The first song what I heard might have been “Speed of light”. I don’t remember exactly but I do remember that I was sitting in my friend’s bedroom and he had a cassette where was this song. I was totally blown away how someone can play guitar like that.

How it is in your home country Finland?  Did people accepted current lineup of the band? (I have many friends, who missing Timo Tolkki). And what about you, did you ever meet him?

Matias: I have met Tolkki several times and I consider him as a friend. We have had nice conversations about the current lineup and musical approach with him and we have a understanding between us. I really respect him and I think he does it as well. The acceptance of the new lineup has been very nice and warm so far.

Of course there’s people who swear on the name of Tolkki and I understand and accept it, but you have to realize that people and bands must go forward and not stay in the past. Opinions are like an asshole, everyone has a one 🙂

You sad (I think that it was for Czech magazine Spark) that you have also funny grind project? Is it active now?

Matias: Haha!! 🙂  Yes I have a grind project. It’s called “Fist in Fetus”. It’s a two member band; me and Perttu Vänskä. We started the project around 2005-2006 and we did an ep which were published on the internet for free and limited 200 cds.

Since 2008 I have been so busy with Stratovarius that I haven’t had any time to do that stuff. It’s really funny stuff musically and the same time very complex and demanding. I really hope that some day we can finish the brutal story of a psychotic serial killer.

How does every day in Finland look?

Matias: Gray 😀 I spend most of my time in my studio (5 by 5 studios) doing some music, practicing, building guitar rigs, mixing, producing etc so I don’t know and care that much what’s happening outside. I’m politically totally ignorant and socially a little bit disabled; I like to be alone. Maybe I’m little bit crazy but that’s the way I live 🙂

On this album you were also worked with Timo Kotipelto´s friend Jani Limatainen. I have some heretical idea J There were any ideas that Jani will join the Stratovarius like full member?

Matias: You’re not the only one with that idea. Unfortunately I can’t say is it possible in this moment. Jani is a super dude and a super player and he has helped us a lot. We have some plans with him but it’s too early to say anything.

Matias: Thank YOU and stay heavy!!! I’m really waiting forward to see you on the road!!!

Source of Photo: www.matiaskupiainen.com Thank you   for help with the article: Robert Wagner 🙂