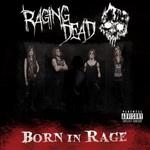 Raging dead is young group from Italy , whose heart started to beat in 2014. Then, in 2015 they have released EP called Born in Rage, which consist of 6 songs. Someone likes horror movies, another one punk, and someno can put theese two things together, like in this album.

After short introduction rolls us full-fledged Scratch me with easy memorable riff, but also with more melodic guitar parts. Anathema, if I were dictator it would have played in every party.

Energetic song, which can make your blood pressure more high. Then we can hear Redemption, and Nightstalker, average creations in this genre. They said, that revenge taste better cold (analogy with beer), and sometimes it is better to practise it in the end, like Raging dead. Vengeance, or the last song. The best way hot to end this EP.

Group says, that their inspiration is in Misfits, Marylin Manson, Rob zombie, Skid row….. but there are not some industrial or alternative elements. Everything stand on classic- guitars, drums, bass, Personally i must say, that there is big impact of heavy metal, so music is more heavier than punk.

Lyrics belong to genre classic- horror theme, also like image and pseudonyms (see in line up) and all of them are in english, so probably if you speak english you will be scared……. No, you will sleep like baby. Of course, i can´t suffer by insomnia.

And vocals. They are totally perfect, and they deserve 150 points from 100.