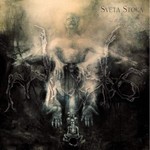 Life is not always farir, beautiful, full of hapiness and great moments. Maybe, it is vice versa.

And right for it, for these sad moments God has created doom metal. Also, you can add to it life misantrophy and aversion against everythinf- black metal.

Now you have interesting result. The same made music group from Croatia- Muka, when this review deals with their second EP – Sveta Stoka.

Immediately, first tones show a lot of about Muka. Depresive atmosphere, sound like in 90., and for me big advantage – chant in native language. Sutra, such as first song combine some ,,soft“ passages with darker one, and together create great contrast.

For me, the best element of Sveta Stoka is it′s atmosphere. But the best word to describe it is magic. Honestly, I consider doom and similar genres for my love, and it is not regular thing that some music swallow me.

Sveta Stoka done it. Stjepan (bass player) told me in interview, that their music should ,,leave you alone“, and this quote is true. This is possible thanks to music, and sound. Journey to the past was great idea.

In Slovakia we say ,,beauty is in simpleness“, and hybrid pre-production sometimes only destroy everything. Combination of atmosphere and slowness from doom metal with rawness and agresivity of black metal is in every song.

Sometimes, we can find some more soft passages, so you have few minutes to breathe and live, but then, hell (meaning such as a great positivum) appear again and your suffering continue. That′s cute. Also, you will fail, if you look for some melodic passages. Another advantage is chant, which is somewhere between ,,civil“ and scream voice. But again, result is great.

Lyrics in native language. One of the best thing in the music. So, I tell everything.

Sum up at the end. There is no space to hesitate in music like this. You have to give full amount of points, and it is not still enough