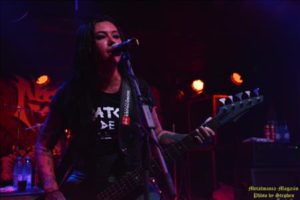 Brasilian thrash metal woman trinity Nervosais becoming one of the greatest band on current metal scene. Great album Nervosa (released this year via Napalm Records) and many gigs counts as a proof. Altough they are on big tour, frontwoman Fernanda was able to answer a few questions.

Hi Fernanda, How was do you feel from current tour?

Fernanda Lira: It’s just great. We’re now touring Europe with Destruction, Flotsam & Jestam and Enforcer, and it couldn’t be any greater than this, it’s our first big one like this, so i can definitely say we’re living the dream.

Fernanda Lira: We’re on the 5th show from this tour and there’s 23 more to go! We’ll visit countries like Germany, Austria, Czech Republic, France, Spain, the UK etc, and for the first time we’re playing Portugal and Ireland, it’s gonna be great!

What did you say to recently concert in Košice?

Fernanda Lira: It was again awesome! The fans there are incredible and very supportive, and we always a  great time together after the show with them!

You also played in Slovakia last year, also on this place, if i am right.  What made you come back to Kosice and to this pub.

Fernanda Lira: It was a coincidence actually, once we worked with 2 ifferent booking agencies for both tours, but it was a pleasant surprise, once we love the venue, everyone who works there, and especially, the fans!

Could you tell something about your last album Agony? Some about music and lyrics.

Fernanda Lira: I really like this album, i think it’s a step forward from our last one, once the songs are more mature, aggressive, faster, and there’s more death metal on it too. The lyrics still the same, about harm that the human being does to society and to the environment around him, but the difference on this one is probably the fact that we’re not only talking about like social issues caused by men, such as corruption, and stuff like that, but also in a more abstract way, like hypocrisy, arrogance, intolerance, etc.

You released clip for song Hostages (btw Slovak hospitals arent so bad, but the same situation can occur in our hospitals as well in future). Will you plan some other clips?

Fernanda Lira: Right now, because Hostages is still very recent and people are still having fun with it, we’re focusing on touring only, but i pretty much think that as soon as we have time and a chance for that, we will record another one, we just don’t even know the song yet haha 🙂

Could you tell something tour final rock and roll/thrash metal bonus Wayfarer?

Fernanda Lira: Me and Prika are great blues fans and we always thought of recording a blues metal song together and when the label asked for a bonus track, we thought it would be the perfect time to do so, and that’s what we did! We didn’t know what to expect from fans, but the feedback was just great, so we’re really happy!

What are your hobbies and interests?

Fernanda Lira: My current hobbies are studying French, watching movies and a couple of series and cooking!

When I listened songs from Agony at home and also on concert at Colloseum of course I thought, that your way of singing is rather difficult. What are you do to stay in shape?

Fernanda Lira: I need to have some rules, because i have nodules on my vocal chords, which limits me sometimes, so i need to be very strict on some routine in order not to loe my voice, such as warming up everyday before the show, try no to drink alcohol everyday on tour, try no to speak all the time, and stuff like that, It’s hard, because i’d love to be singing and screaming, and talking and drinking all the time, but i just can’t haha but that’s life! 🙂

Fernanda Lira: Brazil is one of the greatest metal scenes i know, Wherever you go there, you’ll find a very solid metal scene with awesome bands and incredible passionate fans! I could spend hours listing you great brazilian bands, but some killer ones that not everyone knows would be Lacerated and Carbonized, Jackdevil, Claustrofobia, etc…

What people in your country say to you – considering you are a female thrash metal band?

Fernanda Lira: Nowadays pretty much everyone on our metal scene respects us, because with time they saw we’re very hardworking and we fight for our dreams to come true, also they realized we’re nothing but 3 metalheads doing what we love!!

OK, thats all. Thanks for your interview and concert and I would like to ask you to send the message throuugh me for our Slovak metal fans.

Fernanda Lira: Thank you for the interview and my message is always the same to all metalheads who are reading our interviews: keep on respecting the bands and supporting metal, because we are all responsible to keep the metal flame alive and kicking ass!

Thanks to Patrick Struk for cooperation on this interview