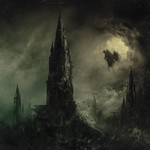 It is quite a common thing that young music bands return to the history. And it doesn′t matter if is the past composed into the music or into the lyrics. Or combination of both of them. And this is the way which choose young band Nyktophobia from Germany playing death/black metal for their debut Fallen Empire. This album is return to the music of 90. of last century, and in their lyrics they deal with mythology, history….

Opening of album, that is job of first song Genesis (characteristic name) such as instrumental intro. Then we continue with first ,,regular“ song Urors Well, which tell almost everything about Fallen Empire. Melodic black/death which return to the past. Besides sound, that is really clean and nice :-).. But, the thing that surprise me the most was the melodicism.

It was also in next song Flight of the Phoenix. And this is what we can say about whole CD. We can find 8 songs + first Genesis on the Fallen Empire. Every of them is straight attack on the goal. And for me, this is the only one negative side of this album, because I could imagine some great epic song, especially with mythological themes.

And every listener have to tell, that Nyktophobia has in main author Micha big talent, so….. Never mind, maybe on another album :-).. Beside this, I can only admire instrumental side of album. Music is hard and heavy enough, so fans of black and death will enjoy it.

But on the other hand it contains a lot of melodic passages, so it can impress people from other genres.  In interview Micha told me, that some of their inspiration came from Iron Maiden, Judas Priest… so now we know, why melodic black/death.

Chant- growl is also on high level. I also really liked lyrics, because mythology is my favourite theme, and I love it since my early childhood. And all of them was in English, so I could understand it 🙂

So some sum up. Nyktophobia will have hard task to make equally or better album like Fallen Empire, because it is great album. But after listening to it, I am sure that it is the next big metal group of the future.