Home » Interviews in English » Michael Tybussek from Nyktophobia – Always stay true to yourself and believe in yourself! 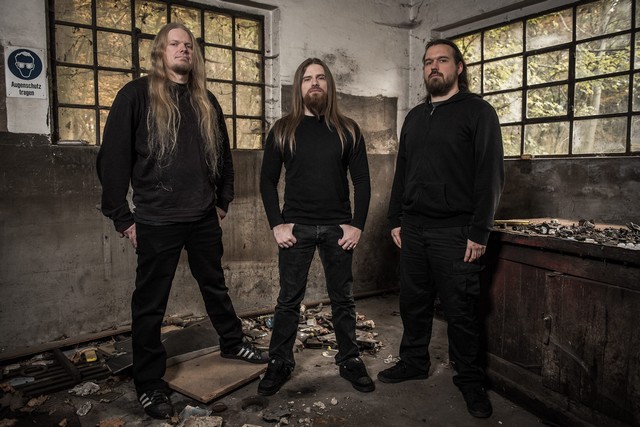 German metal scene is very active – always brings something new. This year was released debut album of great melodic death metalists Nyktophobia – Fallen Empire. Two members from it also play in Dawn Of Disease. You can read more info in this interview with guitarist Michael Tybussek:

Hi! How are you? Could you introduce yourself?

Michael Tybussek: Hello! Thank you. I am very fine these days. I am Michael, guitarist and founder of Nyktophobia.

Could you tell us something about Nyktophobia?

Michael Tybussek: Nyktophobia is an death/black metal band, from Datteln. A small town in Northrine-Westfalia Germany. After leaving my previous band, I needed a time out. For myself of creating music in an active band. But the writing process always had going on. Over the years and after some time I got in contact again, with Tomasz Which (vocals) I had known from back in the days. I showed him some of my songs, which I had created. He was the one who asked me to release it and after some time, I said to myself… Ok, why not!? We just needed a drummer. Then Christian, came in the game. Tomasz had known him, from his other band Dawn Of Disease. He showed him some of our stuff, and here we are!
That’s it!

What does it mean Nyktophobia?

Michael Tybussek: Let me tell it just in three words: Fear Of The Dark. I wanted a bandname, which fits to the music and tells it in just one word.

You have released debut album Fallen Empire, could you tell us something about process of creation of it?

Michael Tybussek: It was a process, over some years. Always when I found the time and the creative output was there, I wrote some music. That is how it works. But next time it will go a little faster I think.

Michael Tybussek: Me Michael, is the main writer of music and lyrics.

What can fans await from Fallen Empire?

Michael Tybussek: A timewarp into the good old 90s where most of the best death and black metal was released. Which had inspired me the most and of course, one great old heavy metal band from Britain! But you have to find out for yourself.

Michael Tybussek: No I would not. It`s all fine, how it is. Don’t live in the past, that’s my mantra. Life always goes on and you have to find your place in it. Stay true to yourself and believe in yourself. There`s always a meaning, at the end!

For me, your music is combination of more genres, and it is really great! What are your favorite music bands, and where do you take inspirations?

Michael Tybussek: Iron Maiden, Dissection, Judas Priest that’s just to name three of them. There are so many good bands out there! Inspirations, coming all over the years. It`s not just the music, you listen to. Also, your experiences you get in your lifetime.

Michael Tybussek: We have found two good guys, who will fill our lineup for future live gigs. More to coming soon. Take a look, at our official facebook page, from time to time.

Michael Tybussek: The German scene is great and full of interesting people. Just take a look at our feastivals and bands. You have to check it out.

Michael Tybussek: We are all normal people who have normal jobs and love the best music in the world. Nothing special as others.

Michael Tybussek: I am into music, my whole live. But every musician has a pivotal point when you know, you want to play an instrument. For me it was in 1986 when Somewhere in Time from Iron Maiden came out. My Dad had bought it in a local record store in 1986. Remember it like it was yesterday. Still my favorite music record!

Michael Tybussek: We want to thank all you guys for support and like I said: Always stay true to yourself and believe in yourself! You know who you are! And of course thank you, for this interview!