Home » Interviews in English » Tom Angelripper (Sodom) – ,,There were lot discussions about my ideas, but without any satisfying conclusions.”

This year was so turbulent for German thrash legends Sodom. They had big changes in their lineup. Guitarist Frank Blackfire has returned to the band, new became Husky and legendary trio has extended  by second guitarist… Debut of this lineup is EP Partisan. Do you want to know more about line up changes, something about upcoming full album and more? Here’s interview with bassist and vocalist Tom Angelrippef.

Hi. I suppose that we can start this interview with news, which has Sodom quite a lot. At first, band has new members. When did you realize, that group need a change?

Tom Angelripper: Hi. That was the day I send the message to them. That was the ,,day of decision“. Sometimes you have to react, without losing any time. But in the end we had different opinions about, how to keep the band going on.

Sometimes it seems to me like rulebook slowdown, no more enthusiasm and no acceptance for me as the band leader. I also expected more creativity and representation of the old, historical Sodom. But anyway, we produced a lot of wonderful albums and had a great time together on tour or in studios.

Last year I came up with the idea to engage a second guitarist and to refresh the complete setlist and band attitudes. But they were not really interested in, to change anything and Berni told me, that he would never accept a second axeman by his side. So, there were lot discussions about my ideas, but without any satisfying conclusions.

How much times takes „recruiting“ of new members- guitarists Frank and Yorck and drummer Husky? And where they immediately for?

Tom Angelripper: After splitting up with Berni and Makka I got in touch with  Blackfire to join the band. I knew that he have his own solo project and also playing with Assassin.

He told me, that these bands are not so busy at the time and he will spend enough time to join the Sodom for upcoming rehearsal session and live show. That was amazing and it seems like a big chance for him to return into the international metal scene.

Husky got in touch with me, after the news came out and he provided himself, to help out if there is any need for. Yorck was our backliner for some shows and my producer Corny told me, that he is a great guitarist, so we did a rehearsal session with all new members and drunk some beers.

That was great, and I took the decision to manifest the new line up with these guys.

Is now everything better with new persons?

Tom Angelripper: Yes, it is. There are no discussions about what we do next. And now we all are moving into the same direction. You have to realize, that Husky and Yorck are big Sodom fans, so they came up with a lot of ideas for new songs and upcoming setlists

Sodom is now with two guitarists. Will this fact has some big impact on your music?

Tom Angelripper: Oh yes. Now we are able to perform songs which are not working with just one. Even my bass can`t replace a second guitar. The live sound is getting more brutal and dynamic. 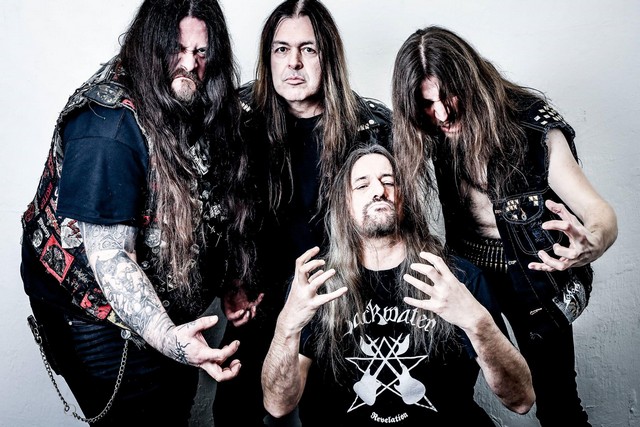 Let´s talk now about new EP album called Partisan. What was the process of creation of it?

Tom Angelripper: The song writing procedure doesn’t change. The guitarists came out with some riffs and ideas. Later we arranged the songs in the rehearsal room. I know, that is very old school, but the only way for each musician, to put his own ideas into.

I always have a lot of ideas for lyrics and a couple of them are still written, just before we start write the music.

Have new members big influence on a new songs?

Tom Angelripper: Of course. Both are excellent songwriters and they know exactly what the fans expect for the upcoming album.

Besides the two new songs, we can also find out live version of song Tired & Red on Partisan. Why did you choose this song?

Tom Angelripper: We want to support remind the times, when Frank plays in the band. A lot of songs wonderful from this area got ignored over the last years.

T&R was also Chris Witchhunter favourite track and the release on the EP is a kind of tribute to him. 10 years ago he passed away and we want to remind his memory

Have you also some material on new full album? And if yes, is there also some proximal date of release of it?

Tom Angelripper: Yes, but we want to work it out without any time-pressure, so we don`t talk about a release date with the record company. But, if everything will be prepared we try to release in the end of 2019 or beginning of 2019. We`ll see ,)

Sodom also await big tour with another legends Exodus, Death Angels and Suicidal Angels. What was the main impulse to create tour like this?

Tom Angelripper: These bands are so awesome. I love them. This is a master package. A killer line up for all serious thrashers.

You have also played concert in Slovakia in 2016 during More Than Fest. Have you some special memories on our country, some positive or negative surprises?

I was always into your lyrics, which are totally political incorrect and true in many ways. What is the big source of inspiration for you?

Tom Angelripper: The main topic describes the current state of our world. Bad news every day.

Especially when you consider how much the world has changed since the latest album. Sectarian killing, cold war, nuclear armament, abolition of democracy in many countries, starvation and all the destructive …that inspired my lyrical mindset and fits so perfect to our music.

That is sad but true. But you will never find any political message or orientation in the lyrics…I always just describe these thing in a very special lyrical way

Are you fan of history, military history etc.?

Tom Angelripper: Yes. This is also a big inspirations for lyrics. But my main interst is the local history of my hometown. I collect postcards, photos, books and maps about it. After 20 years of collecting I own a huge collections of all these items.

Cover of your last full album Decision Day is one of the best worldwide for me. Do you think, that it is possible in these days full of wars, terrorism, violence, medial lies find some institution, or politician, who can we trust?

Tom Angelripper: No! the world is going insane. Everything is storming out of control. You are right…whom we can trust? But all the words of freedom are gone unheard, so I am really scared about our future… 🙁

So, that was the last questions. Thank you so much for you answers, and you can now share some message with our fans

Tom Angelripper: Thanx for supporting us all over the decades and we hope to see you guys soon. Take care. You rule
Your friend Tom 🙂