Home » Interviews in English » Przemysław Konior (Frontier of Existence) – ,,Our lyrics should conjure subcutaneous anxiety, existential discomfort and urge to reflection of reality around us“ 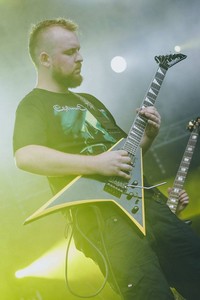 Band Frontier of Existence has released their debut album Chronicles of Grief – I. What was process of creation of it?

Przemysław Konior: That’s long story because we were composing songs a long time before we were even thinking about recording an album, so basically we were playing just for fun. We were meeting in rehearsal room and jamming. At the beginning there was only three of us, drummer and two guitarists. We instantly knew what kind of music we want to play. We didn’t want to sound like particular band, we were just playing what we felt at the time. When we did several songs we started to searching for rest of the band. We found vocalist and bass player. We were playing some concerts but after some time we were forced to change bass player so we focused on composing new material. When we found new one we decided to record album. On this album you can hear how our music changed over the years. We decided to record songs from each stage of the band.

When it comes to studio work that was just insane. Something completely new for us. We gained lot of experience and we had great time together. We learnt lot things about ourselves and studio visit improved our skills. Recordings went smooth and effectively. We recorded everything in one week but we looking forward to go back because we didn’t fulfil all of our expectations.

Przemysław Konior: In our opinion that album is very diverse so everyone who listen to metal music will find something interesting in it. “Chronicles of Grief” is a mixture of lot metal genres like melodic death metal, black metal or sometimes even metalcore. You can find a lot of melodies and calm, clean vocals but on the other hand you can hear heavy riffs, growls and some blast beats. We think we are not modern metal band, we are inspired by metal from nineties so you can’t find low tuned guitars and extremely fast drums. In our music we want to express our emotions and try to make unique atmosphere.

Title of the album, but also lyrics and music evoke me, that it is concept album, am I right??

Przemysław Konior: Yes and no. It’s hard to say because we didn’t planned it to be concept album at the beginning. We wrote music our, friend wrote lyrics, we put it all together then we chose 7 songs and we realised that all of lyrics tell about human feelings and emotions. We decided to call it “Chronicles of Grief – I” because it links all songs perfectly. “I” in the title stands for “one” because it’s first part of Chronicles and we plan to release part two in future. It also refers to first grammatical person because all of lyrics are told by speaker himself. So album doesn’t tell a certain story with beginning and end but it’s concentrated around one main theme. If you look on that album this way it is definitely a concept album.

Are you totally satisfied with it now, or you will make some change if it will be possible?

Przemysław Konior: Of course we would. We listened to it a lot of times and now we can hear some things we want to change. It’s nothing big just a few things that probably only we can hear. It was our first studio session so we didn’t have much experience. Our skills have grown a little bit so we would do it more precisely and more aware. We definitely would spend more time on finding our unique sound. We are glad how it sounds but now we could do it better. 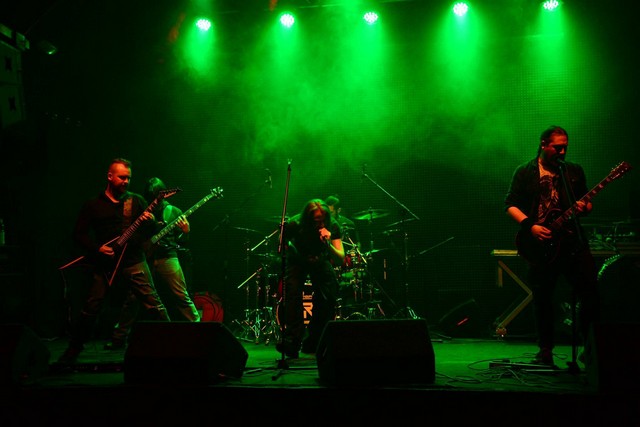 Band Frontier of Existence play great, but also interesting combination of music- melodic death with influence of another genres. Who is the main author of the music and what are the bands which inspired you the most?

Przemysław Konior: As far as “Chronicles of Grief – I” is concerned there was no main author. We did all songs together. Someone came up with certain riff the other add the rest or we figured something out all together and that might be the reason why it is so interesting. Everyone of us is listening to a bit different bands and brings different influences and ideas to our band which is very good because it let us compose diverse music. You can definitely hear black metal vibe in it but at the same time you can hear metalcore influences. But generally we are inspired by Swedish melodic metal bands like In flames, Dark Tranquillity, Hypocrisy or Amon Amarth.

Beside the music, I was also interested in lyrics, which are full of metaphors, philosophy, ideas… such a perfect work, maybe pure poetry! Who is the author of it? And are there some sources where you take inspirations such as books, philosophers…?

Przemysław Konior: All of lyrics except “Origins of Doom” are written by our friend Radek. Origins of Doom is written by Artur, our guitarist.  Our lyrics should conjure subcutaneous anxiety, existential discomfort and urge to reflection of reality around us. We are trying to gnaw under the coat of banality and get to the less apparent truth. Our message is grim and angry. It is hard to pick one source of inspiration. We still searching for new ones.

And what about concerts? Where could fans see you? Is there plan to visit Slovakia sometimes?

Przemysław Konior: Due to hectic work schedules we’re not planning any distant concerts unfortunately. We are working on changing it. Most of our shows are very spontaneous so be alert. You can find all informations about forthcoming concerts on our Facebook page. In closest future we’re playing show in Cieszyn, Poland on October 21. Is there plan to visit Slovakia sometimes? We would love to play in Slovakia some day. If you have any ideas where should we play let us know.

What do you think about current Polish metal scene?

Przemysław Konior: Well, Polish metal scene is very, very strong. Lot of Polish metal bands are known worldwide, for example Behemoth, Decapitated or Vader. But truth is you can hear mostly about well-know bands. If you want to listen to some young metal bands you have to dig on the Internet which is shame because Poland has lot of amazing unknow bands. Recently it changes because you can find some upcoming band as a opener to summer metal festivals. Other thing is how many people come to concerts. If it is famous band it is probably sold out but if it is concert of local band there is maybe 10-15 people, mostly band member’s friends. And that fact sometimes discourage young people to do music and they give up even if they do great music. Of course it is only our point of view.

Przemysław Konior: All of us have full-time job and drummer is also studying. It make difficult to plan shows but we deal with it somehow. Besides that we like to party from time to time and basically we live normal lives.

Ok, that was the last question. Thank you for the interview, and if you want to bequeath something to our fans so you have the opportunity .

Przemysław Konior: Thank you very much for the interview. We would like to greet all of Slovakian metalheads. Stay tuned for some shows in your country.