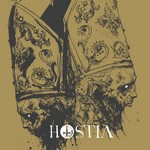 Metal scene in Poland is world phenomenon, which can be envy by rest of the world. But interesting fact about it is that many of the most famous band play extreme genres like death and black. And these extreme waters also choose young band Hostia, which bring to this world debut self-titled album in the sign of death/grindcore.

Everything start with by video clip honoured song Corroded Cross. What to say? Hard, fast, without any compromises death metal with taste of grindcore (mainly due to minutage of songs). Rolling, everything destroying guitar riffs, fast drums, aggressive vocal on a groove metal style, of course also encroaching into growl and some scream.

Invitation on the beginning like from the dreams, and we can continue with second song Heretic´s Last Dance. And again, I we can use the same words to describe it. Alike the whole album. There are only two significant (but still not enough) clauses – Home Rough Home (great word game) with some hardcore influence and clean vocals, and Not Really a Christian Song with rock´n´roll influence and the only guitar melodic part. But still, these tow chants are brutal like that before.

So, together we can hear 13 songs, and as I said before, all flow in fast, hard and aggressive tempo. Influence of death metal is the most significant, but also fans of grindcore will be satisfied. Two yet mentioned clauses are fresh enrich of the whole record, and evidence of talent of the group. I have to also admire great raw sound. And of course, also vocal was done great.