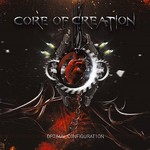 Symphonic metal is pure evidence of fact, that metal is music without some significant borders and limits, and musicians can combine it together with many different genres. It is also genre of young band Core of Creation from Croatia with their debut EP called Optimal Configuration.

The whole record start quite symbolic – with instrumental pure symphonic and dramatic intro respectively outro. And everything between it- exactly 3 songs flow in the waters of symphonic metal.

Immediately, first of them – The New Design impress with significant symphonic elements, which are in many parts totally dominant. The same situation with keyboards. Another thing, which I have to admire is nice clean vocal of Ines, with her great performance.

In next two songs we can also hear some growl vocals from Petar. Thanks to them band create wise contrast on a style beast and beautiful. But Core of Creation also create harder music in these tunes, so also more orthodox fans of metal music will be satisfied.

Optimal Configuration is interesting album. At one hand, it is debut album, but on the other hand band prepare for listeners record full of strong moments, intelligent combination of symphonic metal with many dominant orchestral parts.

Personally, I have to also admire vocal performance of both vocalist. Fresh, kind, and high quality album, which has many to offer. Alike the band.