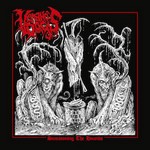 I suppose, that everyone know quote, that we should not judge book according it´s cover. But question is, if this is true in metal music and graphical design of albums. During years metal music exists has been release many albums totally described by covers. And this is also case of Italian band Verano´s Dogs and their debut album Summoning the Hounds.

Everything about band and mentioned record (also cover of it) is linked with doggy thematic and mythology, so we can also hear some of these best friends of man in the beginning of title track.

And that everything start. Apocalypse predicted by cover – grindcore madness in combination with some death metal influence destroying us from the start till the end. This all lead into significant result – all of 10 songs flow in fast and bestial tempo without some deceleration.

Verano´s Dogs don´t care about nothing, and skilled fan of grindcore will also lost in big amount of great riffs, which create dark and close atmosphere. Of course, there are also some melodic parts, which are evidence of talent and top view of the musicians- no one of them has disturbing effect.

Good point also for short, typical grindcore song Rabid Moments. 🙂 I have to also admire vocal of Ulderico, who show us aggressive, but still „clean“ performance. Great work man! And at the end, I was also interested by lyrical concept, something new and attractive.

So some sum up. Italy is not probably know thanks to grindcore bands, but Verano´s Dogs show us, that on the south of the Europe is one great grind band at minimal.