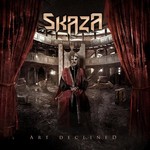 I love Poland from my childhood. Even when I don′t know the reason of this love (beautifull towns, great people, sweets 🙂 …) it last to nowadays. However I have never write review on some album from our northern neighbour. But one day it has come. Concrete album Art Declined from music group Skaza. Just design of it was promise of something great. So we must admire author of it- Piotr Szafraniec.

First song, dramatic intro Alarum make the same promise- we should await something big. And then, suddenly appear Route 17, which introduce Skaza in it′s beauty. Melodic heavy metal with high level of instrumental side is combine with orchestral elements. And also with growls. Yes, you read it right, growls.

Maybe not so common combination, but together with melodic vocals lead into great result. Perpetual, song which walks on the same path, and also enriched by atmosphere. These all make Perpetual one of my favourite songs. Another one which I like the most are Derisive Death, The Misused and Frame of Fire. But everybody must say, that all songs on Art Declined are great.

Together with intro we can hear 13 songs. And here we get to one of positives of Art Declined- compactness and equanimity. There is no weak piece – or bad song. This fact is incidental to strong and great instrumental side, which passes around us crushingly in medium tempo without any fault.

Especially, you will like it if you are fan of melodic music and guitar solos. On Art Declined are so much guitar solos like flowers on the spring meadow. And everyone of them is simply great. Combination of heavy metal and orchestral elements create authentic atmosphere in every song. Again, combination of growls and melodic vocals is also perfect. Lead singer Maciej change these two level of his voice with no problem and show his qualities such as a vocalist.

So, these were positives of Art Declined. Now let′s talk about it negatives……

Some words to the end. Art Declined is debut album of Skaza. But while you listen to it, you have to think that it was made by old experienced musicians. Skaza simply know what they want and how to gain it. Their debut album is without faults and mistakes, and it is really hard (maybe impossible) to find some negatives. For me, Art Declined is one of the best Cd made in central Europe.