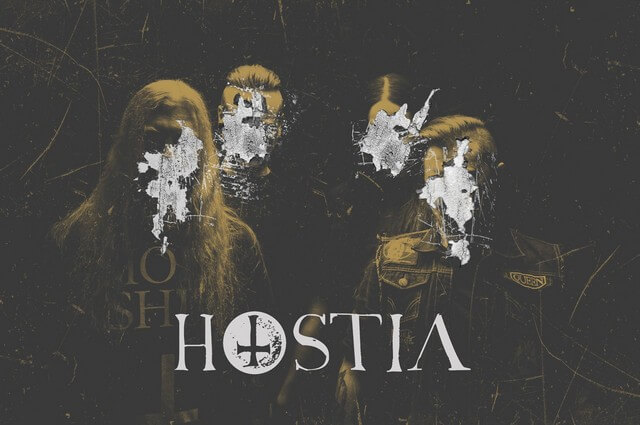 On the end of May, polish metal scene get enrich by debut album released by Hostia. It is for people, who like grind, death, groove, hardcore. But no for Christians. More info in this interview with vocalist – St. Sixtus.

Band Hostia releases debut album. What was the process of creation of it?

St Sixtus: Yep, our bastard child comes out right now. The whole creation process was quite spontaneous and fast. When I joined the band guys already had most of the material, so my job was to make some cool vocals. We started with jam sessions that soon became regular rehearsals. The recording session took only a couple days. We recorded all the music in three days and then all the vocals in two days so it was really quick. Mixing took a bit more time because we wanted to keep natural and raw sound. I think that we achieved that.

Could you describe it in a few words?

St Sixtus: I call our music groovy death/grind metal. We recorded 13 kickass songs, perfect for haedbanging and mosh! All songs are quite short,  but there’s more than typical grindcore style in them. We can hear some hardcore or rock’n’roll influenses. For me it why our debut is not gonna be boring for listeners! But don’t get me wrong – it’s all brutal as fuck!

Who is the main author of music in Hostia? How look creation process of your songs?

St Sixtus: All compositions are made by St Anacletus. He is taking care of the music. I try to do some kick ass vocals on the top of it. And of course the final shape of all songs is the result of  the work of all 4 of us playing them together and making them alive.

I have to also admire cover of album. Could you tell something more about it?

St Sixtus: Thank You! I’m glad that You like it! Our friend – artist Łukasz ‚Pachu” Pach took care about the whole visual aspect, so he made HOSTIA’s logo and cover art as well. We think that this aspect is as important as music. It should fullfill the music. You probably gonna love our upcoming merch, so prepare a lot of money! At least is better way to spend money than giving them to church right?

Next interesting thing is band photo – all members have hidden face. What does it stand for?

St Sixtus: We all played in many different polish metal bands. We did not want people to judge Hostia through the prism of what we played earlier. We wanna our music to defend itself. From that we became just 4 guys behind the dead popes nicknames. Vocals – St Sixtus, guitars – St Anacletus, drums – St Evaristus and bass – St Xyxtus. It’s all about the music!

Album will be released by label Via Nocturna. How this cooperation does began?

St Sixtus: When we released first song ”Corroded Cross” there was the response from couple labels including Via Nocturna. After some talks we chose to cooperate with them. They seem to be really excited about this album and that’s important for us. We know the market very well. Nobody was expecting the million dollar deal. But we want to work with people who understand and believe in what we do.

You have recorded also video for song I Will Not Follow. Why right this song? Is there plan to make another videos?

St Sixtus: We chose this song coz it’s like wild dog whose broke off the leach. It’s fast, short and with no compromise. Solid punch in the face! We have plans for another videos. We hope to release next one around the release date of the album. And then another ones!

St Sixtus: We love playing live so when people gonna get our album and get to know songs, we gonna spread the blasphemy live!

Is it possible that you will visit Slovakia?

St Sixtus: To be honest It would be awesome! If Slovakian metalheads gonna like our stuff and someone invite us, we will be right on the way to kick the shit out of You!

St Sixtus: We have a very strong metal scene. I suppose there’s no metalhead who don’t know bands like Behemoth, Vader or Decapitated. There’s a lot good bands in Poland and most of them are very nice and cool people so we are all friends. It’s sad that all those bands are often more popular outside Poland, ale our government cannot support artist like that. Dimmu Borgir or Moonspell are threated as national treasures and supported in their countries.  Polish government support radical christian church and they try to ban all metal events as well as freedom of speech. It really fucking sucks and it’s dangerous. HOSTIA is kind of manifest against all this simple minded bullshit like fascism or radical religions.

St Sixtus: All of us are very busy guys. Whole band work around art, music or advertisement trade. Some of us prefer to spend free time shooting guns, training martial arts or just playing games and smoke weed! Nothing extraordinary as You see.

St Sixtus: Thank You a lot for being interested in our band! We do really appreciate that. I hope slovakian crazy metal fans gonna like our album, and what most important it would be awesome to play live for all of you! So keep in touch and visit our fb profile for some news! Cheers from Poland!