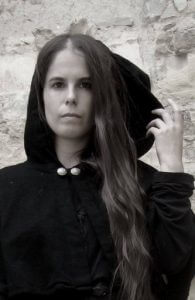 French black metal scene is rich, and you can always find bands, which they go far away from standart limit. Their first record La névrose de la pierre had released last last years under the label Six Raw Records. About the CD, the band and other things had spoken the author of music and lyrics Nebel/Céline Rosenheim:

Hello, how are you doing? first i have a question, how the name of the band Geisterfels was born? I quess it was you who come with it.

Nebel: Fine, thank you. Geisterfels is an imaginary castle whose story is told in the song of the same name. Literally, it means the Ghosts Rock. It suits our medieval themed lyrics and even more the concept of our first album.

Except you, they are two guys who are in the band Aldébaran (Darkenhöld) a Aharon (Griffon). How do they ended up in the band?

Nebel: Aldébaran and I were friends for years. He even was my guitar teacher for a while. He finally decided to help me with my project. I did not know Aharon personally, but Aldébaran had already met him, so I just asked him if he wanted to join us. I really appreciated what he did with his band, Griffon.

Your are the author of music and lyrics, what had come first, music or lyrics?

Nebel: I had the lyrics first, maybe because I’m a writer. 🙂

How the every single song on the La névrose de la pierre… was born? Those songs were written in some short period of time, or it was long period writing?

Nebel: There were two phases in the writing process. I had some songs for an EP very quickly, but it was difficult to find musicians, before I was joined by Aldébaran and Aharon, so I decided to add a few songs and transform the EP into an album.

The themes of travellng, poet and castels… those themes were attracted to you for a long time, or it was something which ahd come to your mind early on?

Nebel: I’ve always been attracted by old architecture. I think you don’t need to know history to be filled with emotions when visiting a monument or a ruin. It’s what I wanted to speak about in La névrose de la pierre. More precisely, I decided to focus on the Rhine valley after a trip to the beautiful village of Bacharach.

Mostly this band take the medieval themes, could we xpect some medieval instruments in the music of Geisterfels?

What´s the story behind the artwork?

Nebel: It shows the Rheinstein castle, one of the most beautiful monuments of the Rhine valley. The picture is a nineteenth century lithography and the background comes from an illuminated manuscripts of the 14th century. It suits the concept of the album that is : medieval ruins seen from the point of view of romanticism in the 19th century.

Why did you specifically chosed this type of packaging?

Nebel: Six Raw records tries to develop original formats, and I liked the idea of having a beautiful object together with the music.

Do you have in mind do live, shopw, or possible tour for this record?

Nebel: We don’t have a line-up for live shows. So, we’ll see later on if we have new opportunities.

What do you do in your free time?

Nebel: As I already mentioned, I’m a writer, mainly for fantasy and gothic novels. I also practice Historical European Martial Arts with medieval swords and other weapons. By the way, I review black metal albums on my blog Diabolus in Musica.

Thank very much, and finding time answering these questions. What would like to say to our readers?

Nebel: Thank you for your time. I hope these few words would give you the will to listen to our music and enter our universe.