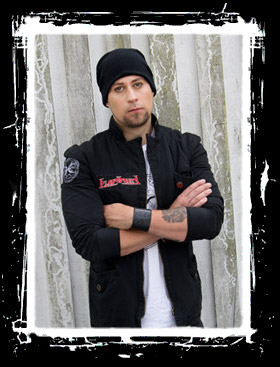 Patrik Johansson: Yes, there is more of traditional heavy metal elements on this album and maybe a little less Power Metal. But I think it’s a natural continuation from the first half of the “Unholy Cross” album, with songs like Moria and Drop the Bomb. But this time we took it even further. A little more “over the top” 🙂

These traditional heavy metal elements together with songs that have the old Bloodbound feel, makes “In the Name of Metal” our most varied album so far.

Patrik Johansson: Tomas (Olsson, guitar), writes most of the lyrics. So you might have to ask him, haha.

But I guess that the dark themes fit Metal music the best.

Patrik Johansson: Tomas and Fredrik (Bergh, keyboard) write most of the material. They are pushing everyone in the band to come up with ideas, but from the experience I have, from the two previous albums, is when those two starts to work on new songs it all goes really fast and then the album is done J I really like what they are coming up with, so I have no complains.

I write music all the time, mainly to my other band Dawn of Silence and hopefully I’ll have some material ready that will fit on upcoming releases.

Patrik Johansson: A German booker is trying to set up a smaller tour as we speak. If all goes as planned it will take place sometime in March/April, but I don’t know more about it yet. We will play some shows here in Sweden and we are also booked to the festival Metal Fest in Czech Republic this summer.

You also have songs with fantasy them, like Moria. Do the members of Bloodbound read fantasy literature in their free time?

Patrik Johansson: I can only speak for myself and I don’t read much. But I like movies with fantasy theme 😉

Patrik Johansson: Yes, I officially joined the band in April 2010 and it feels great. I’m really glad to be a part of this band.

We are working really good together and have a lot of fun. I used to be kind of a fan of Bloodbound. I bought Nosferatu when it was released and have followed the band since. So I was thrilled when I was asked to join.