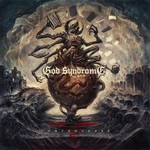 Russia is big country. Oh wait, Russia is the biggest country in the world. So, there have to be a lot of music bands, include the metal one, also death metal. Exactly such as groupGod Syndrome from distant city Samara, which have released album Controversein 2016. Music from Russia is not so known for me, so I was really curious about it.

It is really common thing, that music albums start with intro. And this is the same case. After one minute lasting intro start main star of the evening. Dying star (who love astronomy like me?). Death star. Or death metal. Purge, the first song show us the path, which we will force to walk with God Syndrome.

Rolling death metal flowing in the middle tempo with some more melodic passages. If I should compare album Controverse to the some famous music band, I will say Hate from Poland. We continue without any hesitation through this cd, and our membrana tympanica know, that this is what it need.

Songs flow one by one, and there is no place for deceleration, experiments or messy compositions. Straight attack on the goal. And that is right, because it is the thing, that God Syndrome know the best. In the simplicity is the beauty (of course, with the great instrumental side of the record, like this group from Russia show).

In last days I have reviewed some young bands, which return to the history with their music. In other hand, God Syndrome take the best from the past, and dress it into modern and original clothes. The same I have to tell about sound (honestly, I could not imagine Burzum  sound in music like this). The best songs for me are Summon The Sun, Tormans and the last Hangman Of Atlantis.

Chant is typical for the death metal, so we can hear nice growl, which again will love our membrana and stroke our sensitive souls. At the same time, God Syndrome choose to sing in English, and this is right decision, because their music has potential to impress big amount of people around the world.

For sum up one kind story. My 7 years old cousin during listening to this music said, that he will give 5,5/6. And I agree with him, because God Syndrome prepare for us quality death metal such as Hate, Decapitated…. but with their own brand and strong signature. So 5,5/6.