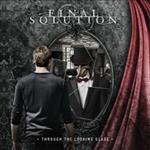 Everything starts with dramatic and almost movie instrumental intro Awakening, which  follows 7 ,,regular“ songs. First of them Sick Of You, agile song show the way of the whole album. The strongest aspect of it is great feel for melodiousness. But the next song, Demon Inside put this aspect into the highest level, and show the elements of power metal, concrete high vocals of lead singer Mario, who wisely change it with ,,the lowest one“ vocals. Accurate this vocal range and diversity with melodic music I consider for best elements of Final Solution. Empty Walls is harder than other songs, The Show Is On Too. (R)evolution is totally different from another tunes. It is because of piano and classical music was used to create it. Short instrumental intermezzo. Next, Dogs Of War is the best song on the whole album for me, and maybe the hardest one, with riffs which sound me similar to Korn (compliment 🙂 ). And if we sum to this melodic refrain, great result is possible to listen. And in the end, song Gray, which follows his ancestors.

Final Solution made energy bomb. Combination of power metal and heavy metal leads in this case to the strong instrumental page, when melodic passages alternate with harder ones. For me, the best is melodic aspect of it, and it doesn′t matter if we speak about guitar solos, melodic refrains… I think that in this genre is problem to differentiate among songs, and often sound much similar. But Through the Looking Glass is another case. Every song is original track with ,,own story“.