Symphonic metal masters VISIONS OF ATLANTIS once more set sail to oceanic myths and the eternal dream of the sunken continent! Titled ‚The Deep & The Dark‚ and set for a release on February 16th 2018on Napalm Records, with their upcoming seventh studio album VISIONS OF ATLANTIS showcase all musical facettes of the genre with a breathtaking classic Symphonic Metal album.

Now the band fronted by the fascinating voice of Clémentine Delauney unveiled their album artwork and track list for ‚The Deep & The Dark‚!

To get a first taste of VISIONS OF ATLANTIS‚ upcoming album, the band premieres the scenic video for the track ‚Return To Lemuria‚! Get your ears & eyes on it right

After having released details of their forthcoming HEIDEVOLK album including the title, artwork, track listing and release date, it’s time to get a first listen to the new record!

The first track of the record as well as first single to be released is “Ontwaakt” (awaken), the band gives a deeper insight of the track and story behind:
„Awaken, the Roman Empire is falling! The internal battle for power tears the Empire apart. Legions turn against each other, emperors bleed and Rome burns. It is time for the tribes of the Northern lands to unite and rise against the tyrant. To take back what is theirs and drive the invaders back to Rome. Every battle that is fought by my people resounds in Rome. With sword and shield the Empire will be banished and the voice of my people will be heard!“

Furthermore songwriter Rowan Roodbaert comments:
“Ladies and gentlemen, brothers and sisters, we proudly present the first single of our new album. This is “Ontwaakt” (“Awaken”), the opening track of “Vuur Van Verzet”. An in-your-face metal song that tells the ageless story of revolt and resistance set against the backdrop of the historic collapse of the Roman empire. Heavy guitars, thundering drums and Heidevolks’ trademark dual vocal harmonies will catapult you back in time. Imagine a battlefield where Romans are being pushed back by Germanic warriors. Well, this is the soundtrack. Now awaken, the Pagan Metal Brotherhood is on the rise!!!” 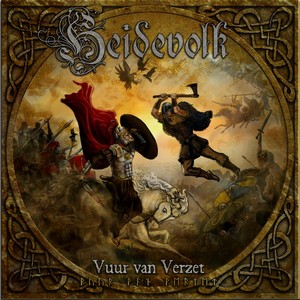 „The Awakening“ will be out on February the 2nd 2018 via Wormholedeath / The Orchard / Aural Music Group; pre orders will be running starting from January the 19th 2018.

THE AWAKENING offers soaring riffs, energetic drums, passionate emotive vocals and orchestral undertones, as it takes the listener through a synergy of emotions set to ‘awaken’ the soul as it tells many stories of love and loss, passion and possibility, folklore and imagination. Reflecting on old stories from the Apparition historical narrative and adding new imaginings, THE AWAKENINGdepicts hope and happiness, growth and love, as well as grief and loss, capturing the many contradictions of life within each song narrative. From melodic riffs to powerful orchestral surges, bursts of dark metal and hints of atmospheric electronica peek out from behind the intricate composition as THE AWAKENING offers a passionate foundation of interwoven rhythmic tracks and melodic ballads.

Sneakout Records is glad to announce the signing of Italian hard rockers Stray Bullets for the release of their debut album. Their story begins back in 2007, when this hard rock combo coming from Verona (north of Italy) started to write the first songs together, in order to move their first steps for the making of their first studio album. It took three years to record and self-release „Lost Soul Town“, a demo/album with ten tracks entirely played and recorded by the band as a home-made recording. In the following years, Stray Bullets faced a series of line-up changes, which accidentally led them to focus their proposal on a more sleaze oriented rock style. In the summer of 2015, after the meeting with Oscar Burato and Stefano Gottardi of Burning Minds Music Group, Stray Bullets took the decision of putting the basis for a collaboration together, in order to improve the quality of their proposal. The band entered the doors of Atomic Stuff Studio under the artistic guidance of Oscar himself, finalizing (with the line-up composed by vocalist Alex Chinaski, guitar-players Steven Evil and Nick, bass-player Dave Dufford and drummer Zen) the eleven tracks of „Shut Up“, which includes most of the songs taken from „Lost Soul Town“, now re-written and re-arranged according to the soul and style of the new line-up. A new band, a new album, and a new adventure: Stray Bullets are ready to rock the world with the energy captured in their debut „Shut Up“.