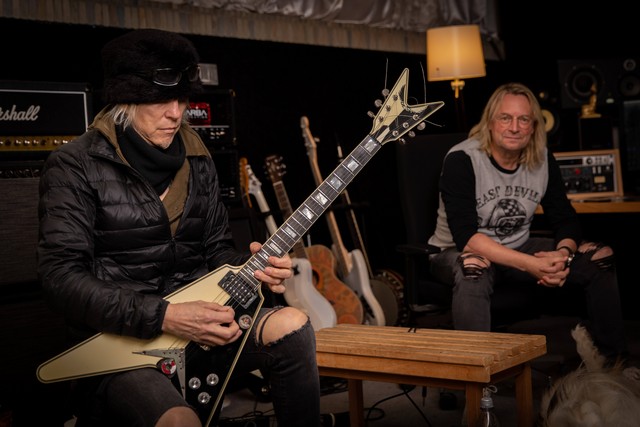 Michael Schenker has completed the recording of a brand new MSG album, which is set to be released on Nuclear Blast on January 8th, 2021. The album title will be „Immortal“, a perfect statement to describe Michael Schenker’s legacy and to celebrate his 50th anniversary as a musician.

„We have a lot of guest musicians, who will undoubtedly help to make the album an exceptional success“, says Michael Schenker. He also adds: „First of all I want to say that I am very grateful to any musicians that have helped to create a fitting tribute to my long career on this special release. I want to thank all of them for their incredible contribution.“
Nuclear Blast founder Markus Staiger is super excited about the new MSG record. Michael Schenker is his teenage idol and brought him on the hard rock path on his early days. „I am really looking forward to release this brand new MSG album, after the two excellent MICHAEL SCHENKER FEST records. At the age of 14, the self-titled MSG debut completely blew me away and helped to shape my taste, since then I’ve followed and loved his music and unique compositions. Those ten new tracks are pure magic!“

The album was predominantly recorded at the Kidroom Studio in Germany, with Michael‚s long time partner Michael Voss who co-produced the album and also sings on two tracks. „It is always a pleasure to work with Michael Voss, who works around the clock and is a phenomenal musician and producer. He was composing the melody and lyrics  for a power ballad I had written the music for, and he ended up singing along. It turned out so amazing, I did not think anyone else could have done a better job for this song. Truly great.“

„Immortal“ will continue the tradition of the previous two MICHAEL SCHENKER FEST records „Resurrection“ and „Revelation“ and feature a big list of friends and guests. the album’s main vocalist will be uprising Chilean born talent Ronnie Romero (RAINBOW a.o.), along with Michael Voss (MAD MAX a.o.), Ralf Scheepers (PRIMAL FEAR) and Joe Lynn Turner (ex-DEEP PURPLE, RAINBOW a.o.) singing on two tracks each. Besides Michael Schenker himself, the album was recorded with Steve Mann (keyboards), Barry Sparks (bass, DOKKEN etc.), as well as the three drummers Bodo Schopf, Simon Philipps (ex-TOTO) and Brian Tichy (ex-WHITESNAKE). „Brian was thrilled to be part of it. He is a master of groove and ended up playing on six songs. I could not believe it: This man is something else. He is a true natural and very original. With his input it made the album very solid and complete. So guess what – I am very happy“, smiles Michael Schenker. The newest addition to the record is keyboard player Derek Sherinian (ex-DREAM THEATER, ex-KISS etc.), who plays on the album’s opening track, featuring German power machine Ralf Scheepers on vocals. „Derek and myself trading solos, it sounds unexpected and beyond my expectation. Absolutely fantastic!“

„Immortal“ will feature ten tracks, including the magnum opus „In Search Of The Peace Of Mind“. „I wrote this song when I was 15 years old, it was my first ever written piece of music which I recorded with SCORPIONS on our first studio album „Lonesome Crow“ in 1970, getting released in 1972 – when I had already left SCORPIONS to join the British rock Band UFO in June of 1972 – when I was 17. We re-recorded this song for my 50th anniversary as a celebration and it turned out to be an epic; with an extra extension at the end of the song, which turned out absolutely fantastic with Simon Phillips on drums, doing his usual amazing stuff.“ The result is a true highlight and features even more surprises: „Gary Barden sings the first verse,  continued by Ronnie Romero – and in the end we have Ronnie, Doogie White and Robin McAuley screaming their heads off, as a tribute to my 50th anniversary. Absolute amazing. Thanks to the guys for doing this!“

The limited first edition of this upcoming MSG album will feature another unique extra: „We have the MICHAEL SCHENKER FEST – Bang Your Head – Blu-ray, recorded during our headline show in Balingen/Germany two years ago: Unfixed, raw, pure and great! There’s a couple of small mistakes, but because the show and recording went so well, I decided to keep it the way it went on the night. It’s live, magic and pure.“ 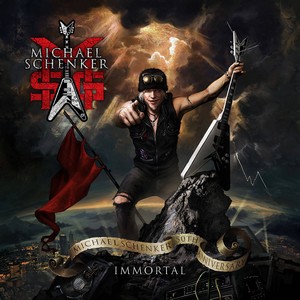 „Below The Waves“ is a deeply personal, pivotal point in the album in which the Fleetburner is faced with harrowing questions towards himself and the surrounding world.

Featuring a cathartic solo by Nils Courbaron (Sirenia, T.A.N.K) and the ever-amazing Agnete M. Kirkevaag as the voice of the ocean, this is the last video before the release of the full album on September 25th 2020.

It is not about avoiding fear of the pitch-black darkness, but to go into the darkness itself…

Norway’s premier progressive black metallers Enslaved have today released third single ‚Urjotun‘ from their upcoming studio album Utgard – out 2nd October via Nuclear Blast. The single, one of their most experimental yet, is accompanied by a psychedelic video detailing dark visions and a journey to the outer reaches of the subconscious.

Vocalist Grutle Kjellson commented:
“The lyrical idea for Urjotun had been spinning around in the chaos in the back of my head for quite a while, when Ivar sent me the riff-demo last autumn. I knew instantly that this was it, the very soundtrack of the rise of the primeval giant, the Urjotun! Our mutual love and fascination for that early krautrock scene and for bands like Tangerine Dream and Kraftwerk, finally fully ascended in an Enslaved song, almost 30 years after we picked up those legendary kraut-albums. It’s funny, that in Germany they referred to this kind of music as “Kosmische Musik”, cosmic music! And, that is exactly what this song is about; cosmic chaos. On top of this, director David Hall, made a perfect projection and visualization of our troubled minds.”

In Utgard,  Enslaved continue exploring uncharted progressive and psychedelic territories – placing them in a unique position of both bearers of tradition as well as explorers into the unknown – propelling themselves into the future, yet honouring their roots. 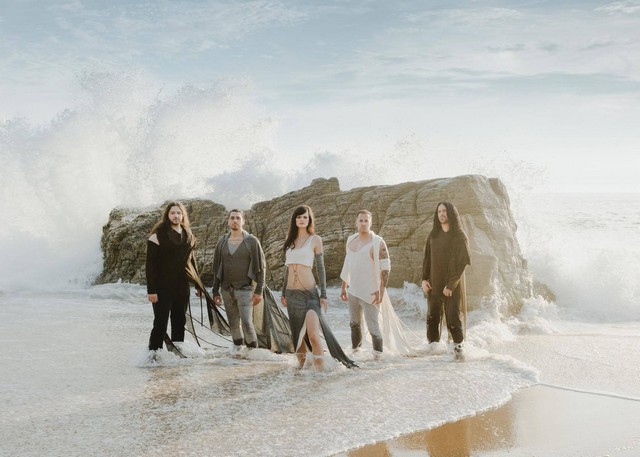 VISIONS OF ATLANTIS’ long cherished dream came true: An unforgettable journey through the maritime depths of their history accompanied by the Bohemian Symphony Orchestra Prague!
This autumn, VISIONS OF ATLANTIS will continue their entrancing symphonic journey through the maritime depths by presenting fans with their very first LIVE album/Blu-ray/DVD, A Symphonic Journey To Remember! Recorded live at the 2019 BANG YOUR HEAD!!! Festival with the Bohemian Symphony Orchestra Prague, the multi-format live offering is set to be released via Napalm Records on October 30, 2020.The audiovisual voyage through the long and successful history of the band showcases their strong, manifold identity and cements their standing at the top of the scene. Alongside their bandmates, the heart-wrenching duets of Clémentine Delauney and Michele Guaitoli are underlined by the outstanding musical power of the Bohemian Symphony Orchestra Prague.

The highly energetic, enchanting live music video “Heroes Of The Dawn” catches a first visual spark of the palpable live atmosphere of the festival, and the band’s breathtaking musical delivery.

Following the release of their latest chart-breaking studio album, Wanderers (#17 UK, #30 US, #39 DE), symphonic metal alliance VISIONS OF ATLANTIS are now ready to conquer your eyes and ears with this unique, first-class live appearance!

Clémentine Delauney on A Symphonic Journey To Remember:
“We are absolutely thrilled with finally releasing our very first live blu-ray/DVD, A Symphonic Journey to Remember. Our show at Bang Your Head!!! Festival in 2019 with the Bohemian Symphony Orchestra Prague gave us the perfect point in space and time to make the dream of playing with an orchestra come true. We hope you will enjoy this audiovisual experience as much as the memory of this show is still vivid and precious to us!” 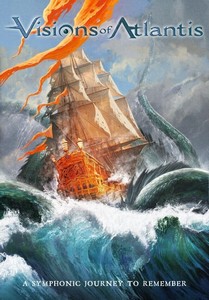 In 2019, VISIONS OF ATLANTIS realized their dream of captioning their symphonic experience at the highest level. Supported by the orchestral accompaniment of the Bohemian Symphony Orchestra Prague for the very first time, the quintet captivated the audience once again with their impressive headliner set at last year’s BANG YOUR HEAD!!! festival. This unique experience is captured on Blu-ray/DVD and audio formats – 17 atmospheric tracks guide listeners and viewers through the unparalleled, powerful discography of VISIONS OF ATLANTIS. The outstanding symbiosis of Clémentine Delauney’s and Michele Guaitoli’s vocals, accompanied by the band’s breathtaking soundscapes and impressive scenery, will guide fans through the deep valleys of the untamed seas.

This unforgettable live experience will be available as a special Blu-ray/DVD/Audio CD bundle as well as a double vinyl Gatefold, as an exclusive deluxe edition and via all audio streaming services.

This unique experience will be available in the following formats: