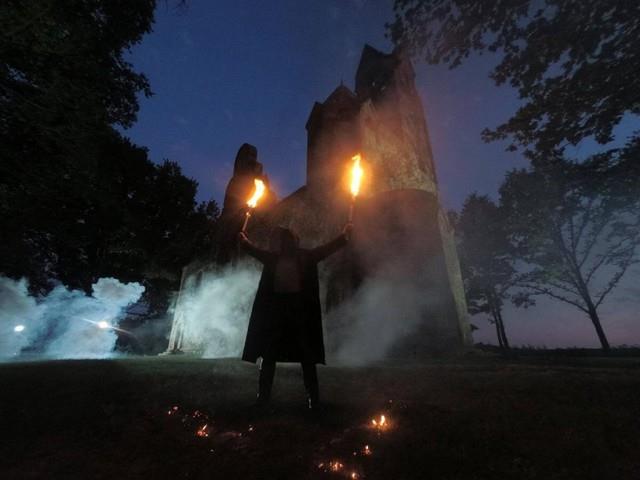 BEHEMOTH set the world on fire when the Polish masters of black metal took an abandoned church in rural Poland to perform a worldwide stream event in the heart of the pandemic lockdown.

After over a year since the show’s premiere, ‘In Absentia Dei’ returns on to a range of deluxe formats for fans to relive the danger and drama that took place on that fateful night in 2020. The live release will hit the shelves on December 17th.

Nergal states, „In Absentia Dei was a massive challenge and a huge risk, but it was a great artistic and commercial success. The response was absolutely brilliant – we made a statement with this performance and set the bar high. I hope that we can continue to raise the bar with the projects to come!“ 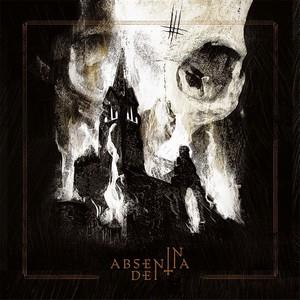 To begin proceedings, BEHEMOTH offer a clip from the opening track from ‘In Absentia Dei’, „Evoe“.

„In Absentia Dei“ will be available as digital album, digibook and 3LP Vinyl in various colours. All Nuclear Blast triple LPs come with a premium 20-page booklet AND a cut-out, build at home model of the actual church that BEHEMOTH performed in.

The event was said to set a new standard for streaming events in the future and this was something BEHEMOTH set out to achieve from the start. Produced by Grupa 13, „In Absentia Dei“ was presented as a show of four parts, woven with high-production theatrics and even a hellish flames emanating from all parts of the sacred building.

BEHEMOTH released their latest full-length, „I Loved You At Your Darkest“, in 2018 to vast critical acclaim.

„I Loved You At Your Darkest“ marked a milestone in the history of the band, being not only their most successful album, but also an audiovisual masterpiece: from its detailed, blasphemous artwork, to the highly vicious, yet deeply emotional tracks, BEHEMOTH once again played with fire – and ignited a wildfire burning the narrow minded bigotry of Christianity down to the ground. 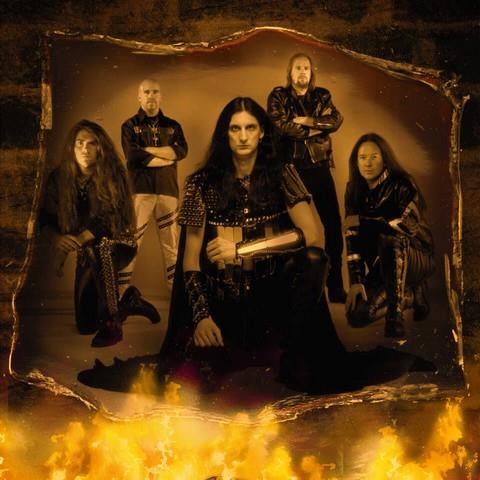 21 years ago, the Swedish Heavy Metal powerhouse HAMMERFALL , travelled to Nashville to record their third album with legendary producer Michael Wagner, leaving the safe space that was Studio Fredman in Göteborg.

Fredrik Nordström had recorded the two previous records, so naturally that was a huge change for the band.

The Wagner experience and the “Renegade” album turned out great, as we all know today.

For this anniversary edition, the band felt that they needed to close the circle and have Fredrik remix the Renegade album.

The result is „Renegade 2.0“ which will be released via Nuclear Blast Records on November 12th in many beautiful formats and with a brand new album artwork made by famous cover artist Andreas Marshall,  which makes every HAMMERFALL fan heart beats faster, and the pre-order starts today!

Remember Wacken Open Air 2001 when ten thousands of metal heads were roaring along the chorus for „Templars Of Steel“? No? Well, let us refresh your memory with this legendary live footage from just that show
A song like a cry for a heavy metal revolution that really caught on to the scene!

To this day, „Templars Of Steel“ is a true highlight of every HAMMERFALL live show and is a track that captures the true essence of the band.

Frontman Joacim Cans remembers: “Oscar and I went down to Gran Canaria to write and finalize some songs for the Renegade album. Somewhere in the constant ”haze” I still remember that Oscar played the riff to the song and it totally blew me away.

Couldn’t wait to sink my teeth into the hymn-like masterpiece and try some vocal ideas in my temporary studio built in the bathroom. This song became the opening track on the upcoming tour and created one of the coolest show openings ever when the draw bridge slowly started to come down during the pulsating intro to the song.” 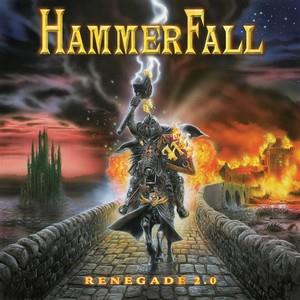 VINYL AS BONUS LP IN BOXSET ONLY 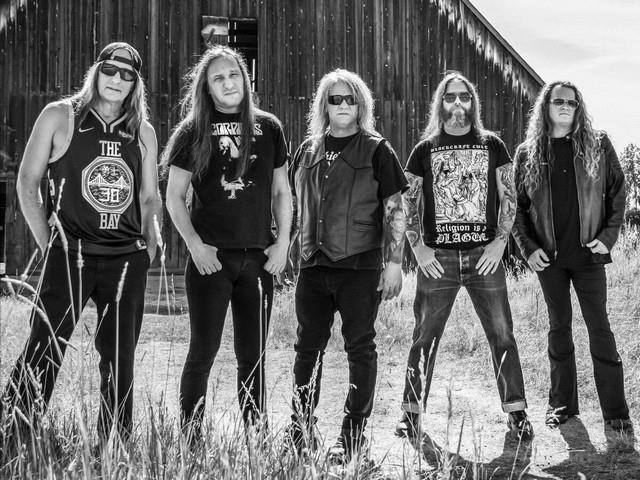 With a bond forged in youth and decades-old friendship, the undisputed masters of thrash metal return with their eleventh studio album, PERSONA NON GRATA due to be released on November 19th via Nuclear Blast Records. Today, the band releases the lyric video for the second single „Clickbait“ which can be viewed here:

Gary Holt comments:
„Very excited to launch the release of ‚Clickbait‘ from our upcoming record! Crushing and aggressive as hell, it captures the power of the new record perfectly! Getting more excited by the day. November 19th can’t come fast enough!” 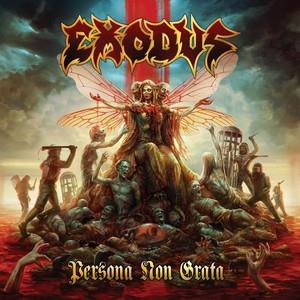 PERSONA NON GRATA will be available in the following formats:

The first single:
The Beatings Will Continue (Until Morale Improves): https://youtu.be/lJlXDRNOEdo

Literally translating to an „unwelcome“ or „unacceptable“ person, PERSONA NON GRATA touches on themes of modern societal disgust and degradation. The band gathered at Tom Hunting‚s house in the mountains where they produced and recorded Persona Non Grata from three home-built studios .

Steve Lagudi was at the helm of engineering while the band enlisted Andy Sneap of Backstage Studios to mix the album. For the third time in the band’s history, they returned to Swedish artist Par Olofsson to create the album artwork.
Links:
http://www.exodusattack.com
https://www.facebook.com/exodusattack/
https://www.instagram.com/exodusbandofficial/
https://www.youtube.com/c/exodusattack 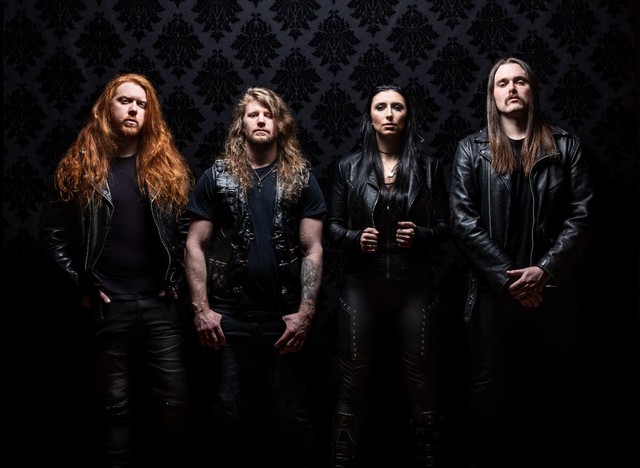 Three years after the release of The Hunt for White Christ (2018), iconic Swedish death metal legends UNLEASHED return with their new studio album, No Sign of Life, out November 12, 2021 via Napalm Records – once again setting the ultimate standard of death metal!

On No Sign of Life, the band formed of Viking descendants transports the listener straight into an outraging battle with 11 forceful tracks that revive the essentials of death metal, facing the sheer brutality of war. UNLEASHED are back to defend their throne, forging another uncompromising musical weapon that continues the marvelous legacy of Vikings.

To satisfy the bloodthirst, UNLEASHED just released their staggering brand new track from No Sign of Life, entitled “The King Lost His Crown”, alongside a sharp lyric music video. The track dives right in without mercy, dominated by destructive guitars, blasting drums and the well-known chunky and brutal screams of genre-carving vocalist Johnny Hedlund.

Johnny on the first single:
“In the aftermath of the battle of Jorsala, where the Midgard Warriors stood victorious, White Christ is now being hunted from the once so holy city. The enemy flees towards the desert, and his armies are about to lose faith in their leader. It seems that the king lost his crown”. 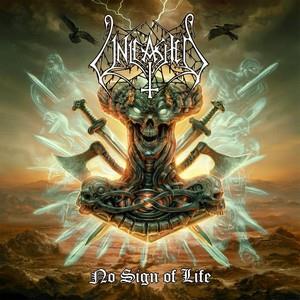 Watch the new lyric video for „The King Lost His Crown”

The silence gets crushed right within the first notes of the album opener “The King Lost His Crown” and invents a paving rage that leaves no time to catch your breath during its entire playing time.

The album unfolds with “Where Can You Flee” as an unstoppable war battalion and builds upon UNLEASHED’s well established trademark sound and strong lyrics. Bare boned screams are accompanied by epic shouts praising Odin and heavy guitar riffs as the journey of clashes continues in “The Highest Ideal”, until the album reaches its glorious peak with “Here at the End of the World” as a fading hymn for the victorious march that leaves the battlefield behind in ashes.

The Chief Vikings of Swedish Death Metal leave no doubt that they are still true to their roots after 32 years of existence. UNLEASHED proves that they indeed are and will stay the unchallenged leaders of Sweden’s death metal forefathers!

UNLEASHED on the album:
“It is our hope that our warriors all over the world will enjoy the new album just like they have our previous ones. We have, as always, tried to stick to our roots while testing our steel to develop the genre of Viking Death Metal even further. Hail Odin!