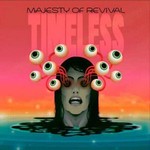 Hard music offer one big possibility- you can choose one of many subgenres to play. And if you can not pick up just one, you can take them so much as is possible. Alike the band Majesty of Revival from Ukraine, which has released new album called Timeless.

Album contains 11 songs, and I have to admit, that I have no faced rich record like this for a while. Everything start with hard-rock/heavy metal madness Destroy Space, which will be loved mainly by fans of old music. Great guitar riffs,  clean vocal with typical highness and freedom. Second chant change tempo, mood, and we can enjoy rock tune Disposable Clowns also with keyboards. And we can say, that whole record flow in alternation of genres and different influences- mainly rock/hard-rock/heavy metal/progressive. The most significant difference is tune called Dopellgänger with black metal vocals.

This one is followed by true rock masterpiece – Consciousness Beyond…, which is for me best song on CD. But, this is hard to say, because all songs are on a very high level, and i tis hard to pick up just one. Great album