On December 9, the Polish Heavy Metallers CRYSTAL VIPER will release a video clip to the first single off the new album, entitled „The Witch Is Back“. The video clip has been produced by the Grupa 13 production house, which most recently also did the KREATOR, BEHEMOTH and AMON AMARTH videos. „The Witch Is Back“ single will be available as an online stream on Spotify, Apple Music and other streaming services, and except that the digital download will be available on iTunes and Amazon. Fans that will decide to preorder the digital version of the forthcoming new album, will be able to immediately download „The Witch Is Back“ single for free.

CRYSTAL VIPER are returning after a 4 year absence, with a brand new concept album entitled „Queen Of The Witches“, which will be released on February 17, 2017, on AFM RECORDS. The album has been produced by Bart Gabriel (CIRITH UNGOL, MYTHRA, SACRED STEEL), and engineered and mixed by Mariusz Pietka (JACK STARR’S BURNING STARR, LONEWOLF, MORTICIAN). The album’s cover artwork has been created by the legendary German artist, Andreas Marschall (RUNNING WILD, BLIND GUARDIAN, OBITUARY). „Queen Of The Witches“ also features three special guests: the MANOWAR co-founder and guitar hero Ross The Boss, and no less legendary Jeff Dunn (aka Mantas) of VENOM / VENOM INC., will appear with guitar solos in two of the songs. Except that, in one of the songs fans will hear a duet of Marta Gabriel and Steve Bettney, vocalist of the NWoBHM cult heroes SARACEN.

„Queen Of The Witches“ will be available as limited edition vinyl LP (first pressing: 500 copies on white vinyl, gatefold cover), CD, and digital download. The LP and CD versions will include different bonus tracks. The album can be already pre-ordered: http://bit.ly/CRYSTALVIPER_Queen_PREORDER 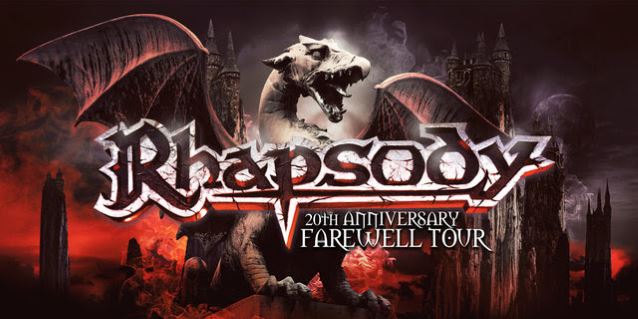 Luca Turilli states (quoted from Fabio Lione’s facebook profile): “I am really super excited to be part of this unique and special event together with Fabio and my other friends. The fact of playing legendary songs like ‘Wings Of Destiny’, ‘Beyond The Gates Of Infinity’ and ‘The Dark Tower Of Abyss’, never played on stage before, will be the best way to celebrate the 20th Anniversary and a great reason to meet together for a very last time. This farewell tour represents for me the closing of one important chapter of my music career, as in the future I will dedicate myself to the cinematic music style of my new ‘Luca Turilli’s RHAPSODY’ band and to other important projects exclusively. Don’t miss such amazing event. It will be the last time you will be able to see me, Fabio and Alex Holzwarth together on stage playing some Rhapsody songs. We wait for all of you to share some wonderful emotions and live together some memorable nights!”

POWERWOLF is surely one of the most successful German bands in Heavy Metal. No other band has laid down such a path to success in recent years: Founded in 2003 POWERWOLF has released six albums thus far, the last of which made it to the very top of the charts. ‚Blessed & Posessed‘ also hit the official German album charts at #3 and their latest effort, in form of the stunning live-DVD “The Metal Mass – Live”, hit number #1 again!

Uncountable captivating live gigs, sold-out headliner shows, frenetically celebrated festival gigs all over Europe (Wacken, Summer Breeze, Graspop, Masters of Rock – to name just a few!) prove that POWERWOLF is one one of the most exciting live bands on earth!Their latest DVD / BluRay ‚The Metal Mass – Live‘ without a doubt convinced fans and press alike of this simple fact. It is presented in beautiful packaging with highly valuable content that makes every collectors‘ heart beat faster. A strong visual concept sets the stage for a sophisticated, opulent show by a perfectly matched band. This culminates in a most spectacular metal party that can’t be finished without the obligatory blessing of priest Attila himself.

Now the band unveiled the re-release of their 2015- chart success album ‚Blessed & Possessed‘, which will be coming out as an opulent tour-edition on January 6th 2017! ‚Blessed & Possessed‘ will be available as a 2-CD Digi Pack with a brand new cover artwork and including a special bonus live CD of their overwhelming headlining performance in front of 40.000 celebrating fans at Summer Breeze festival 2015! A true must-have for every collector and member of the POWERWOLF army:

Pre-orders are now available! Get your copy of the exciting new ‚Blessed & Possessed‘ tour edition HERE!

POWERWOLF is a religion in itself and so we celebrate with a real metal mass:
The band will be again extensively touring in 2017, catch the band and their unique shows live on the following dates, when they will hit the road together with EPICA & BEYOND THE BLACK here:

Sinatras to sign with LOGIC IL LOGIC for the debut album!

Italian Thrash/Death’n’Roll band Sinatras signed a deal with LOGIC IL LOGIC Records for the release of its debut album “Drowned”, scheduled for an early 2017 release.