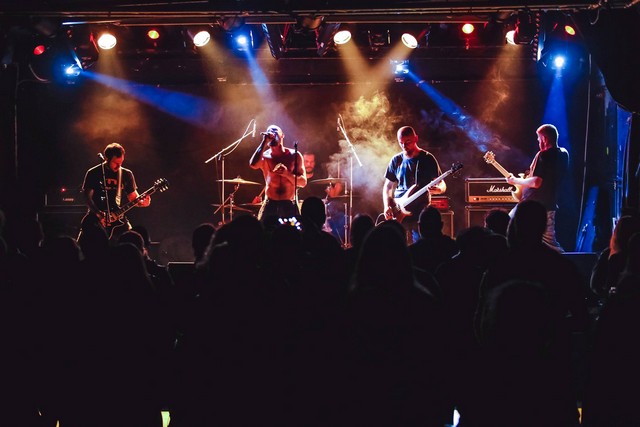 Metal scene from lands of former Yugoslavia is little obscure, but it has many treasures. Black metal band Muka from Coratia is one of this. They released their second EP – Sveta stoka on March. You can read more details below in the interview with their bassist

Hi Stjepan ! Could you tell us something about Muka?

Stjepan Dianić: Hi, my name is Stjepan and I’m the low-end rumble, the 4-string apocalyptic doom invocation in Muka. I play bass 🙂 Muka is a blackened doom metal band from Zagreb, Croatia. We’ve been active since 2012. We have self-released two albums : ‘Svi Šute’ in 2014 and ‘Sveta Stoka’ in March of 2017.

You have released second album Sveta Stoka in March 2017, could you tell us something about it?

Stjepan Dianić: That’s right. It’s been out for almost two months now. We are very satisfied and a bit surprised with the positive reactions from people around the globe. Since the lyrics are in Croatian. We didn’t have any huge expectations, but we have been proved wrong with people downloading the album, reviewing it, sending us messages from all over the world.

It’s a mixture of extreme metal genres. Sometimes it’s dissonant, sometimes it’s doomy, sometimes it’s a full on assault of aggression and fury. The album title literally translates to ‚Sacred Cattle’, but it’s actually meant to be ‘Sacred Scum’ a reference to all who blindly follow their demagogues to inevitable and ghastly demise while willfully renouncing their humanity, dignity and pride.

To simplify a bit, I would describe it as a form of contempt and abhorrence towards idiots and the system that breeds idiots.

Could you tell us something about process of creation of it?

Stjepan Dianić: We took our time to create enough songs so that we could choose the most brutal, most intense pieces for the album. Our general concept for albums is to make around 30 minutes of quality music, with songs that fit together as whole, without any fillers or sub-par music.

We threw out at least 2 finished songs and a couple of ‘in progress’ ones into trash. We didn’t feel they either fit the concept or that they were in the right style.

Our first drummer and good friend Debason got caught up in a lot of business and personal obligations and his really busy schedule prevented him from participating in the recording of ‚Sveta Stoka‘, so that postponed the recording for at least 6 months.

Stanislav recorded the drums for this album as a session player. We’re currently in search for a full-time drummer for the band.

Stjepan Dianić: The lyrics are all written by our singer Boro. Music is a group effort. We all bring ideas to the table and we work as a collective in exploring them, arranging them, turning them into proper songs that have a concept, a story to tell from its beginning to the very last note.

I must give a deserved credit to Edin, he did really a lot of work when talking about riffs, song concepts etc. for ‘Sveta Stoka’.

What are the main differences between it and your début Svi Šute?

Stjepan Dianić: ‘Sveta Stoka’ is a step forward in a more extreme, aggressive direction than its predecessor ‘Svi Šute’. There are still doom elements on this album, along with some atmospheric, clean parts. But overall we believe, that it is another evolutionary step in creating an extreme, forceful style which is more atmospheric, repetitive and raw than technical.

Your music is a combination of more genres, such as doom, death, black with strong atmosphere and it is really great! What are your favorite music bands, and where do you take inspirations?

Stjepan Dianić: Thank you for the kind words. The name Muka translates as Anguish or Torture (the Greek myth of Tantalus is actually a good reference). This perpetual state of human mind is our main inspiration both musically and lyrically.

As far as music is concerned. We try to create atmospheric and aggressive soundscapes that are hard for the listener. A sort of masochistic journey that ends with numbness, emptiness and relief.

We don’t take inspirations from other bands or musicians. I guess you could hear some elements from our favorite bands in our music but then again. It’s the same with any other band. We all agree on black and doom metal – anything from Burzum, Mgła, Ved Buens Ende, Blut Aus Nord, Virus, Gorguts, to old Anathema, My Dying Bride, Neurosis etc… The list could go on forever.

Stjepan Dianić: Well, we don’t play live that much, since we live in a small country and there is no point in playing the same clubs over and over again. Muka has a reputation for playing intense, aggressive, energetic, live shows where we try to channel all our energy into a force.

That will take listeners out of their comfort zones, out of their worries and earthly problems and leave them empty, numb and content. We believe that this is the best way to experience what Muka is about.

Your music is full of doom atmosphere. Do you prepare some special show during concerts to compose it into our performance? Costumes, masks etc…..

Stjepan Dianić: No. It’s us, humans that express their wide range of thoughts and emotions through instruments and voices. We don’t play any fictional characters, so we don’t need masks, veils, hoodies and all that other stuff that actors/performers use to play a ‘special stage character’.

Don’t get me wrong, I have no problems with bands using corpse paint, spikes, costumes, scenography if it’s used intelligently and with an artistic purpose, but that is not what Muka is about.

For me, every band which sing in their native language make it in a good way. Is it possible that you will change Croatian language in the future by another language?

Stjepan Dianić: We started with native language because it sounded sincere and intense and we plan to continue in that direction. I can’t really speak for the future music, but I doubt that there will be any English lyrics. Then again, never say never 🙂

Croatian metal scene is not so much known for us, so how will you characterize it?

Stjepan Dianić: It’s small 🙂 There are some great bands in Croatia, some even play around the world and are actually pretty well-known in their genres. Personally, I don’t like their music, they don’t please my taste, so I won’t mention them. haha

Those I like I won’t mention too. Because fuck you guys, here’s some hard love – get used to it. 🙂 I support the bands whose music I like and hard-working musicians that are sincere in what they do.

As far as festivals and clubs, we have Dark „O“ Metal Fest in Rijeka this year (the only one I’m aware of ) and Zagreb has a couple of clubs where more extreme music can be found. But generally, it’s poor compared to (for example) Vienna or even our neighbors Slovenia.

I’ve been optimistic when I was younger that over time the scene would get better, more professional, more understanding, more supportive, then I just accepted the reality and now I don’t give a fuck.

Stjepan Dianić: We’re boring fucks, we talk about music, weed and sex most of the time. Oh, and about the shit and sludge storm that has covered humanity in this moment in time. We have our dull day jobs, our bills, our frustrations, our anger, our music and will to overcome all the bullshit. We’re bombarded with on a daily basis and remain decent, content humans.

Ok, that was the last question. Thank you for the interview, and if you want to bequeath something to our fans so you have the opportunity :).

Stjepan Dianić: Thank you for the opportunity to introduce Muka to your readers. For anyone who wishes to find out more about the band, head over to muka.bandcamp.com or follow us on our facebook page.
Cheers!