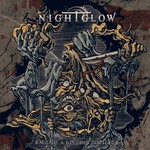 I got many CDs from Italy for years I write reviews on rock/metal CDs. And according my skills, metal scene in Italy is one of the best in Europe. Next evidence of it is album Rage Of A Bleedin‘ Society from band Nightglow.

From beginning with first seconds record show us, that heavy metal has still strong position in metal scene. Notably, when it is combined with other genres – little bit core, little bit groove. We can hear big amount of hard music- almost all of the songs, which will gladden hearts of fans. Also we can find some great guitar solos, which make some opposition according to hard, sharp riffs.

Band probably chose the best song for representation of album- Fuck@looza and made video clip for it. Here I also admire interesting idea in video, which bring something new. But personally, I have to pick up best song on record for me. It is Gone, acoustic, mysterious song.

What to say? Band Nightglow prepare for us great album, which combine traditional heavymetal with another genres. There is no weak place on CD, all of them are on a high level of quality. And if we sum to it enormous originality, perfect album is born.