Sweden’s influential and long revered heavy metal giants IN FLAMES are celebrating two major milestones in 2020 with their 30th anniversary as a band, and 20th anniversary of their seminal, critically acclaimed album, »Clayman«. In honor of this monumental occasion, Nuclear Blast Records presents a special 20th Anniversary Edition of »Clayman«, to be released on August 28th. 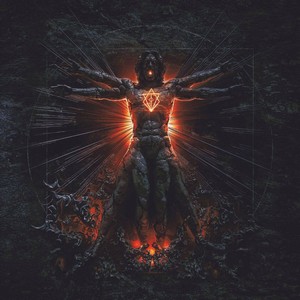 This day the band releases the lyric video for the first single, „Clayman (Re-Recorded)„:

Front man Anders Fridén says of the 20th Anniversary Edition:
„This record changed our career in a number of ways. Being the 20th anniversary this year, we had to do something massive for the fans. Going back into the studio to re-record some of the original tracks took us right back in time to when we first recorded them. Every detail of the new artwork and visuals was deeply thought out keeping in mind what the Jesterheads would want to see most. This one’s for you. Thank you for 20 years of »Clayman«.“

»Clayman 20th Anniversary Edition« comes entirely remastered by Ted Jensen (PANTERA, DEFTONES, GOJIRA) and features all new artwork in a 16-page booklet, a brand-new instrumental medley plus 4 re-recorded versions of fan-favorites such as ‚Only For The Weak‘ and ‚Pinball Map‘. Re-recorded songs were produced by Howard Benson (MY CHEMICAL ROMANCE, MOTÖRHEAD) and mixed by Chris Lord-Alge (GREEN DAY, ROB ZOMBIE). The record will be released digitally as well as on CD Digipak and a 2xLP colored vinyl packaged in a deluxe trifold that includes an oversized booklet, 11 remastered tracks on a 12” record and 5 bonus tracks on a 10” record in a printed sleeve.

Preceding the physical release of »Clayman 20th Anniversary Edition«, IN FLAMES will digitally release the »Clayman 2020 EP« on July 24th, which features the 2020 versions of ‚Only For The Weak‘, ‚Bullet Ride‘, ‚Pinball Map‘, ‚Clayman‘ and a new instrumental track, ‚Themes and Variations in D-Minor‘.

Less than a year after the release of their covers EP Explorers, Canadian melodic power metal quartet UNLEASH THE ARCHERS are back with a brand new 10-track masterpiece in the form of their fifth full-length album, Abyss. Lifted by the urgent, breathtaking vocals of frontwoman Brittney Slayes, on Abyss, the band re-cements themselves as an unequalled, undeniable metallic force with their strongest album to date.

Colossal, heart-stopping and heavy-as-hell while often exploring a noteworthy aura of addictive pop sensibility, Abyss further proves the indelible songwriting and technical talents of UNLEASH THE ARCHERS – not only reinforcing how high a modern band can soar within the atmosphere of power metal, but introducing an unbridled array of diverse sonic elements into the fold. Poised to make its mark amid a new generation of epic metal concept albums, listeners will be itching to hit replay within seconds of its satisfying end. 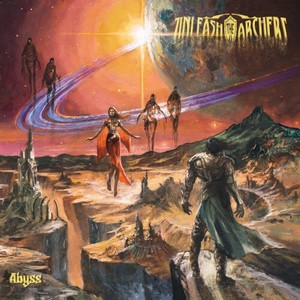 Check out a new teaser of the album’s title track “Abyss” Here:

Beginning with a dreamlike acoustic introduction accented by the smoky beckonings of singer Brittney Slayes, opener “Waking Dream” quickly punches into a colossal wall of sound, setting the stage for the auditory escape that is Abyss. Powerful anthems such as the immense power metal-encapsulated title track “Abyss” and metallic pop-tinged earworm “Through Stars” conjure classic elements while maintaining an entirely fresh, forward-thinking approach. Guitarists Andrew Kingsley and Grant Truesdell turn heads with wicked work on stellar tracks such as “Legacy” (fans of artists like Devin Townsend and Astronoid, take note), while Slayes showcases her incredible vocal diversity and range on mighty epics like “Return To Me” and “The Wind That Shapes The Land”. Drummer Scott Buchanan makes technical strides on burners “Soulbound” and “Faster Than Light” – setting breakneck twists and turns ablaze with his bandmates. UNLEASH THE ARCHERS rounds the edge of Abyss with throwback-hued “Carry The Flame”, and wraps up with the soaring, rewarding concept closer “Afterlife”.

Thematically, Abyss is the direct sequel to the band’s 2017 album Apex. Frontwoman Brittney Slayes explains about the concept:
“Our protagonist, The Immortal, is once again awakened at the beginning of our story, but this time he is in an unknown place: a ship out in deep space. He wanders alone for a time, reflecting on his misdeeds, searching for his new master. Finally, he finds him, and learns that it is the Grandson of The Matriarch, our antagonist. The Immortal had taken The Grandson’s father away some sixty years before, to be sacrificed by The Matriarch in a ritual to achieve immortality (the events from Apex) and now the Grandson seeks revenge against The Matriarch with the aid of her own weapon, The Immortal.

This album is a classic take on good versus evil, light versus dark, The Grandson versus The Matriarch, but it also uses the ‘person versus self’ literary device in that The Immortal is battling with the good and evil within himself, and must decide in the end if he is simply a tool for others to use, or a man with free will and the ability to choose his own path; a struggle I think every human can relate to.”

We ride the thunder, lightning is our sword, the blaze across the Eastern sky, keepers of the call – Forevermore.

WARKINGS Warriors – Prepare yourself! A new crusade arises with the mighty WARKINGS and their new album Revenge, to be released via Napalm Records on July 31st! The band enters the battleground and faces ghoulish demons with the formidable weapon made of pure Heavy Metal. The four ancient kings, a roman Tribune, a wild Viking, a noble Crusader and a martial Spartan, gathered in the halls of Valhalla, escape from the realms of obscurity and steal their souls from the Lord of the Abyss. In a bloodthirsty furor, the demons seek revenge on the WARKINGS but Odin’s legates are more than ready to vanquish the Monarchs of the dusk with their hard-hitting anthems. Folklore-like elements like the opener “Freedom”, the death angel’s chant “Azrael” or the epic hymn “Warriors” prove the WARKINGS’ uncompromising vigor.

In order to sweeten the wait for Revenge, the WARKINGS present their first single “Warriors” today. This battle hymn is made of pure Heavy Metal: straight forward riffs, sing-along lyrics and attacking drums pay tribute to the Order of the Dragon, including their most known member Vlad “Dracula” Tepes! Accompanied by a fast-paced official video, featuring a beautiful scenery and the epic story of a battle well-fought, this track will sweep you off your feet.

The Tribune on “Warriors”:
“Hell wants revenge…so we will fight fire with fire. We forged an alliance with the order of the dragon and the infamous Vlad Tepes.” 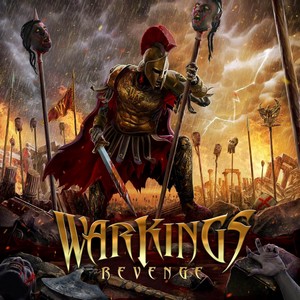 WARKINGS – Revenge:
Once, there were four ancient kings who gathered in the golden halls of Valhalla, a roman Tribune, a wild Viking, a noble Crusader and a martial Spartan. They were sent back to the living by the allfather himself to tell the stories of the epic battles they fought.

It turned out to be a great time for the WARKINGS, striking the world with their battle hymns. Keen of new adventures they made their way through the land of the living. But as the fame of the four kings rose, the envy and hate of the Underworld grew.

When the four kings escaped from the realms of darkness, they stole their souls from the lords of the Underworld. In rage, bloodthirsty demons and warriors swarmed out to retrieve what belonged to them, seeking for revenge on those who betrayed them.

But the kings strike back. Leading the constantly growing legion of their WARKINGS Warriors, they will enter the eternal fight against the darkness. Armed with new hymns and with a mighty battle cry, they will put themselves against the forces of the underworld
Hell wants revenge…and the WARKINGS are ready for battle.

The Crusader on Revenge:
“We are back to crush the armies of the underworld with steel and battle axe. Join us…we need you battle cry!!!” 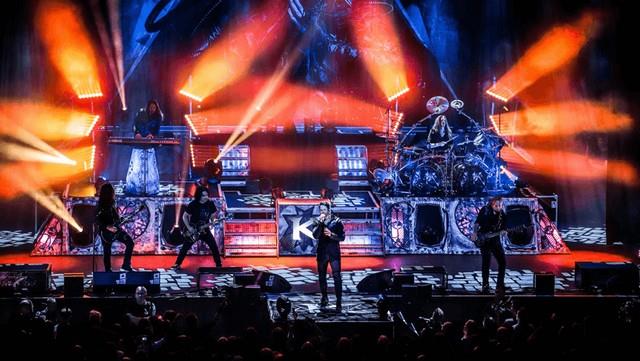 An electrifying concert experience featuring stunning production,
very special guests and exclusive extras!
Symphonic metal masters KAMELOT return with their newest offering, I Am The Empire – Live From The 013, to be released on August 14, 2020, via Napalm Records!

The majestic live album/DVD/BluRay, recorded at the legendary 013 in Tilburg, Netherlands, consists of twenty-one songs that will tug on your heartstrings, make you want to bang your head and give you a taste of KAMELOT’s grandness live on stage with more than 100 minutes of live music and multiple exclusive extras, including backstage interviews of all guests, bandmembers and fans.

Today, KAMELOT have released the live video of their performance of “Sacrimony (Angel of Afterlife)” – featuring Alissa White-Gluz (Arch Enemy) and Elize Ryd (Amaranthe) – taken from the Silverthorn album (2012), which marked one of the many highlights of this night to remember for all attending fans and musicians. The hit single starts off with adventurous first notes and ominous vocal lines, evoking the palpable, non-stop energy to come. This auditory epic soars to new heights in its live incarnation.

September 14, 2018 marked one of the highlights of KAMELOT’s very successful career. The band around mastermind Thomas Youngblood, known for its high class collaborations, invited the creme de la creme of the symphonic metal scene to celebrate that evening in Tilburg. Featured guest musicians like Alissa White-Gluz (Arch Enemy), Charlotte Wessels (Delain), Elize Ryd (Amaranthe) and Lauren Hart (Once Human) – just to name a few – made this evening in Tilburg an unforgettable night to remember for every fan and musician in attendance.

This concert setlist features KAMELOT in prime shape – with a hand-picked mixture of KAMELOT classics and live premieres, rounded off by stunning production and mixed and mastered by Sascha Paeth (Avantasia, Epica and more)!

KAMELOT guitarist Thomas Youngblood on I Am The Empire – Live From The 013:
“We are pleased beyond words to present our new live album/DVD/BluRay I Am The Empire – Live From The 013. After multiple SOLD OUT events in The Netherlands, it was only fitting to film this event at Tilburg’s famed 013 venue. The icing on the cake was having all the special guests attend this historic night, it was truly divine. “ 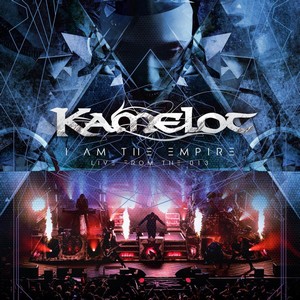 “It was a magical evening that night. It was so much fun to play such a nice long set with a packed house of fans who knew every word to every song alongside my Kam fam and girlfriends!”

”It was an historical moment for me to take part in this KAMELOT live-DVD recording. Let’s not forget that it was with KAMELOT I began my touring life, and we toured a lot. I am so happy to finally be able to perpetuate the era of hard work and friendship with such great quality. A huge thanks to the entire KAMELOT family for embracing my presence on this very special evening.“

„It was an absolute delight performing “Under Grey Skies” with KAMELOT live in 013 during their special night. It felt like a big family gathering. Thank you for including me. I am sure that this DVD will be a wonderful memento for Kamfans worldwide!“

“What a MASTERPIECE!! It was a huge honor to share the stage with so many legends and witness this beautiful piece of KAMELOT history!”

I Am The Empire – Live From The 013 will be available in the following formats: